Burning cigarette may have sparked fire at Northside apartment complex 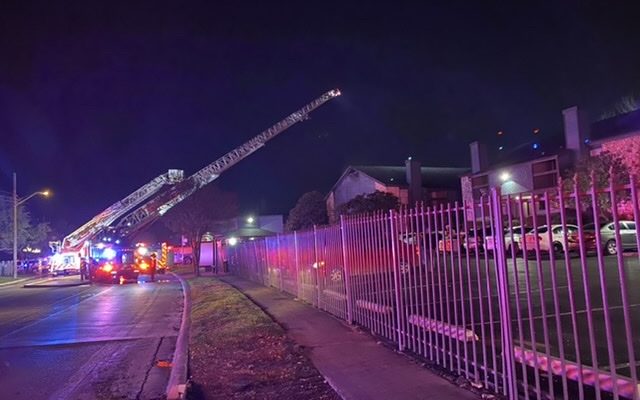 SAN ANTONIO (KTSA News) – Investigators believes a burning cigarette sparked a fire at the Parliament Bend Apartments in the city’s North Side. Residents at the complex on Parliament near Blanco Road ran out into the cold when the blaze erupted on a second-story balcony around 3:30 Friday morning.

Sara Gonzales helped keep her neighbors warm as they watched firefighters douse the flames that were shooting from the roof of one of the buildings.

“I feel bad for these ladies because they just ran out with blankets.  I put her mom in my car with my sister because she doesn’t have any shoes on,” she said.

Bernard Pritchett did his part to help out when he was awakened by the sirens.

“I saw the flames and all that smoke and I started knocking on doors to get everybody out, but the fire department got here pretty quick” he told KTSA News.  “I just gave my friend some socks and shoes to put on his feet.”

About a hundred firefighters were called to the complex on Parliament near Blanco Road, but the second alarm was canceled  when the first crews quickly doused the flames. Joe Arrington with the San Antonio Fire Department says one apartment sustained extensive damage and three others were damaged by smoke and water.

The American Red Cross was called to help about a dozen residents who were displaced by the fire, and a VIA bus was brought in to provide a warm place for those who were left out in the cold.