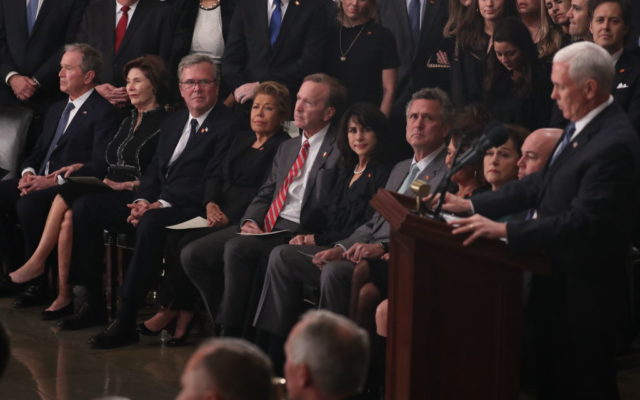 WASHINGTON, DC - DECEMBER 3: (AFP-OUT) (L-R) Former president George Bush, Laura Bush, Jeb Bush, Jeb’s wife Columba Bush, Neil Bush, his wife Maria, and Marvin Bush listen to Vice President Mike Pence speak during an arrival ceremony as former President George H.W. Bush lies in state in the U.S. Capitol Rotunda on December 3, 2018 in Washington, DC. A WWII combat veteran, Bush served as a member of Congress from Texas, ambassador to the United Nations, director of the CIA, vice president and 41st president of the United States. Members of the public can pay their respects as Bush lies in state until Wednesday, when he will be honored during a memorial service at the National Cathedral. (Photo by Jonathan Ernst-Pool/Getty Images)

A source close to the Bush family told CBS contributor Peter Maer the family is boycotting this week’s Republican National Convention because of their animosity toward the president.  That primarily stems from then-candidate Trump’s verbal attacks on former Florida governor Jeb Bush during the 2016 presidential race.

The source says the Bush family “has NO respect for him (Trump). The two families could not be more different. The Bush family is all about public service. The Trump’s are all about self-service.”

However, one Bush has endorsed the president for reelection: Jeb Bush’s son, Texas Land Commissioner George P. Bush.  The source said they believe the endorsement is more an effort to survive in Texas Republican politics.