Bush: I’m proud of the work being done at The Alamo 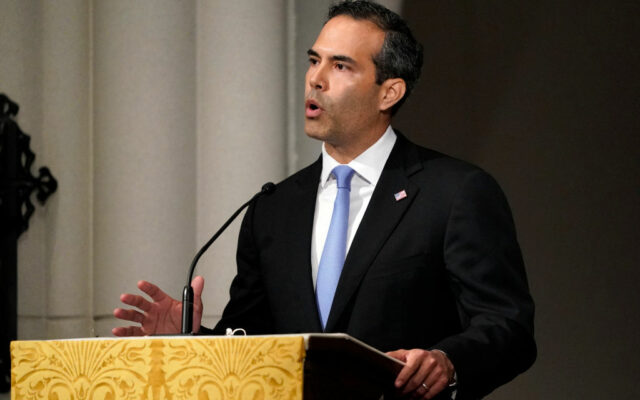 HOUSTON, TX - DECEMBER 06: (AFP-OUT) George P. Bush gives a eulogy during the funeral for former President George H.W. Bush at St. Martin's Episcopal Church, on December 6, 2018 in Houston, Texas. President Bush will be buried at his final resting place at the George H.W. Bush Presidential Library at Texas A&M University in College Station, Texas. A WWII combat veteran, Bush served as a member of Congress from Texas, ambassador to the United Nations, director of the CIA, vice president and 41st president of the United States. (Photo by David J. Phillip-Pool/Getty Images)

SAN ANTONIO (KTSA News) — Texas Land Commissioner George P. Bush said Monday he is proud of the work being done on the redevelopment of The Alamo site.

Bush — who is challenging Ken Paxton in the Republican Party primary runoff for Texas Attorney General — was asked by KTSA’s Jack Riccardi how the turmoil around the redevelopment plan for The Alamo may affect the public’s opinion in his bid for attorney general.

In response, the land commissioner said the site of The Alamo was in such disrepair that it needed immediate action, that came with the help of the state legislature and Lt. Gov. Dan Patrick.

He added that the credit for the work goes to his staff.

After asked again by Riccardi, Bush blamed the controversy around the redevelopment plan on “misinformation.”

“As the advocate for the plan, my goal was the make sure that the entire public — not only of San Antonio and Bexar County, but the people of Texas had a chance to weigh in.  And look, democracy is not pretty, especially when you are bringing in public input from around the state,” Bush explained.  “This is The Alamo, this is the shrine of Texas liberty and we deserve to be passionate about it and all of us having our voice in it, including members of the legislature.”

The attorney general challenger also touted other actions he took to protect The Alamo.

“It was my office that protected the iconic brands and secured the intellectual property rights,” the Republican said. “None of my predecessors secured the trademark or the intellectual property rights of the church — the iconic facade.  That’s why you have Alamo Rental Car and other businesses that have taken the brand before I watch at the helm as land commissioner to make sure it is legally protected for future generations.”

In the interview, Bush provided updates on the project.

“We’ve closed down Alamo Street.  We’ve gotten rid of the Ripley’s Believe It or Not wax museum — we announced that about three weeks ago,” the land commissioner continued.  “The Cenotaph ain’t moving.  The palisades have been rebuilt and the 18-pound cannon has been installed on the southwest side of the compound.”

Bush also said the Land Commissioner’s Office will be announcing this summer the Phil Collins Visitor Center, “where we will showcase what we believe is the largest private collection of Alamo-related artifacts.”