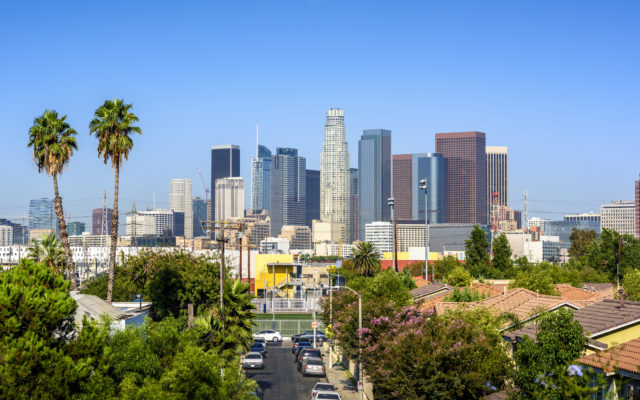 By KATHLEEN RONAYNE, Associated Press
SACRAMENTO, Calif. (AP) — California Gov. Gavin Newsom announced Tuesday he’s abandoning a plan to build a high-speed rail line between Los Angeles and San Francisco, a project with an estimated cost that has ballooned to $77 billion.
“Let’s be real,” Newsom said in his first State of the State address. “The current project, as planned, would cost too much and respectfully take too long. There’s been too little oversight and not enough transparency.”
The idea championed by Newsom’s predecessor, Jerry Brown, is years behind schedule. The latest estimate for completion is 2033.
Newsom, though, said he wants to finish construction that’s already under way on a segment of the high-speed train from Bakersfield to Merced, through California’s Central Valley, arguing it will revitalize the economically depressed region.
He’s also replacing Brown’s head of the state board that oversees the project and pledged more accountability for contractors that run over on costs.
Newsom also said during his speech that the state faces “hard decisions that are coming due” on clean water, housing and homelessness.
Newsom rebuked President Donald Trump again on border security after saying Monday he will withdraw most of the state’s National Guard troops from the Mexico border.
“Last week, we heard (Trump) stand up at the State of the Union and offer a vision of an America fundamentally at odds with California values,” he said. “He described a country where inequality didn’t seem to be a problem, where climate change didn’t exist, and where the greatest threat we face comes from families seeking asylum at the border.”
Brown had agreed to deploy troops last year at the Trump administration’s request, although he said they couldn’t participate in immigration enforcement.
Newsom, though, said there’s been a “gray area” in the troops’ duties that may have allowed some to inadvertently participate in immigration activities. A Guard official said the state’s troops have not helped detain anyone.
Newsom disputed Trump’s claim there is a crisis on the border and said any need for National Guard troops was eliminated when Trump decided earlier this month to add 3,750 more U.S. troops at the border.
Newsom’s speech also detailed his ambitious policy goals for the state.
He announced the creation of the new Commission on Homelessness & Supportive Housing to address what he said is a moral issue that has become a public health crisis. His administration recently sued the Orange County city of Huntington Beach, accusing it of not meeting its affordable housing goals.
The governor has invited the leaders of 47 other noncomplying cities to a meeting next week for what he called “a candid conversation.”
“I don’t intend to file suit against all 47, but I’m not going to preside over neglect and denial,” he said during his address. “These cities need to summon the political courage to build their fair share of housing.”
Newsom also promised to have a plan within 60 days for dealing with the recent bankruptcy filing by Pacific Gas & Electric Corp. after years of devastating wildfires.
He said he has convened a team of the nation’s best bankruptcy lawyers and financial experts from the energy sector to work with his administration to develop a strategy to protect the state’s power grid, wildfire victims, company employees and ratepayers.
“We are all frustrated and angry that it’s come to this,” Newsom said. “PG&E didn’t do enough to secure dangerous equipment or plan for the future.”
He also promised to address the pressure that climate change is putting on utilities.