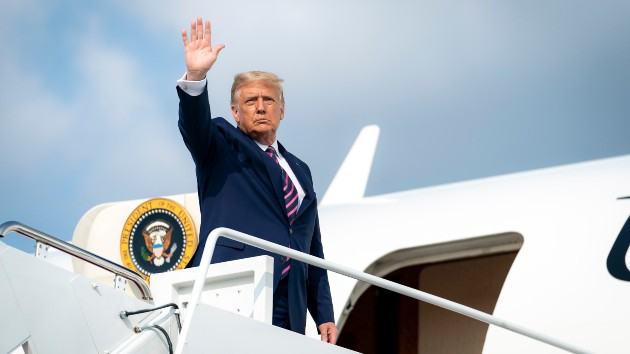 Official White House Photo by Tia Dufour
President Trump’s term will expire before the Senate has a chance to consider the House’s articles of impeachment, although it is still working out how to try him and possibly ban him from holding elected office again. This is raising questions about whether he can even be tried for impeachment, since he’ll already have moved out of the White House — and whether he’d still enjoy the benefits accorded to former presidents if the Senate convicts him.

Senate Majority Leader Mitch McConnell does not plan to reconvene the Senate to hold Mr. Trump’s trial before his term ends on January 20; this would only occur once Joe Biden has assumed the presidency, creating what some legal experts consider to be a legal gray area.

“I don’t think the founders ever thought about this scenario where you would have a president engage in impeachable conduct close enough to the end of his term that he would be impeached as president while tried after,” said Stephen Vladeck, a constitutional law expert and professor at the University of Texas School of Law.

Can the president be impeached after leaving office?

Legal scholars have been arguing about whether it’s constitutional to try a former president for impeachment.

In a Washington Post op-ed, conservative former U.S. Court of Appeals Judge J. Michael Luttig says it’s not, asserting that the Constitution only allows the Senate to convict an incumbent president.

“Once Trump’s term ends on January 20, Congress loses its constitutional authority to continue impeachment proceedings against him — even if the House has already approved articles of impeachment,” Luttig wrote this week.

But Vladeck says that another section of the Constitution – Article I, Section 3, Clause 7 – puts two questions before the Senate when it says, “Judgment in Cases of Impeachment shall not extend further than removal from Office, and disqualification to hold and enjoy any Office of honor, Trust or Profit under the United States.”

“The Constitution contemplates that the Senate can do two different things when an officer is impeached. It can remove them from office but it can also disqualify them from holding future office,” he told CBS News. “The expiration of President Trump’s term renders one of those moot, but not both of them.”

In Vladeck’s view, removal from office and the lifetime bar are separate and independent of one another. He argued in a New York Times op-ed that an official can’t dodge the move to disqualify him or her from holding future office simply by resigning — as Secretary of War William Belknap did in 1876, knowing he was about to be impeached by the House. The Senate — though it ultimately voted to acquit him — first passed a resolution affirming it had the authority to try him, regardless of his resignation.

If the Senate ultimately convicts Mr. Trump on the article of impeachment sent by the House, it can take a second vote to bar him from holding future office. While the first vote would require two-thirds of senators — 67 — to convict and remove him, the second vote to bar him from public office would just require a simple majority because the Constitution does not demand a higher threshold.

Even though the House has now voted to impeach Mr. Trump for a second time, he won’t automatically lose the benefits enjoyed by former presidents.

“An impeached president who is not convicted by the Senate doesn’t lose any benefits,” said American University presidential historian Allan Lichtman.

The Former Presidents Act, passed in 1958, entitles every living former president to these benefits:

The act also states three criteria that define what it means to be a former president qualifying for these benefits:

It was specifically written to disqualify a president who is impeached by the House and convicted by the Senate. Former President Nixon received his benefits because he resigned before an impeachment and removal could occur.

What happens if a president is convicted after leaving office?

“There’s now no scenario where Trump’s service is going to be terminated by the Senate,” Vladeck said. “Even if the Senate ultimately votes to convict, I actually think Trump will have a pretty good argument that at least based on the text of the statute, he’s still a qualifying former president, and that would settle the matter.”

Lichtman drew the same conclusion from a narrow reading of the statute, though he said it probably wasn’t the intention of Congress when it drafted the law.

“I don’t think they contemplated a situation like this one, where the impeachment of the House come so late that a trial could take place after the president takes office either because he’s defeated or retired. But I certainly think the intent of the law was that if you’re guilty of high crimes and misdemeanors you don’t deserve the perks,” he said.

This creates a legal gray area between the way the law is written and what Congress intended. But Vladeck said the only way for the issue to end up in court is for the General Services Administration to refuse to treat President Trump as a former president, and for Mr. Trump to sue them in return.

“I just don’t see that happening,” he said. “Even if Trump is convicted I assume the GSA will treat him as a former president based on this particular reading of the statute.”

What about his Secret Service protection?

In 1994, the federal law that provided lifetime Secret Service protection to former presidents and their spouses was amended to limit that protection to 10 years for any president who entered office after January 1, 1997. In 2012, Congress passed a law called the Former Presidents Protection Act, which restored lifetime protection. President Obama, who along with his predecessor, President George W. Bush, stood to lose coverage while still alive — signed the bill into law in early 2013.

The statute governing Secret Service protection merely authorizes the agency to protect “former presidents,” but doesn’t explicitly define a former president the way the Former Presidents Act does. Post-presidency impeachment conviction or not, that likely means that Mr. Trump would keep his protective detail.

Will he receive a presidential library?

The Former Presidents Act does not provide funds for presidential libraries; those are created with private donations. If Mr. Trump wants to raise money for a library, he can.

Even if he does not build one, the United States Archivist is legally allowed to acquire land and facilities to create an archive of his presidency.

What if Congress changes the law around former presidents?

Congress could decide to amend the Former Presidents Act to specify that a president who is convicted after the end of his or her term is not considered to be a former president, and therefore not entitled to the pension, staff, workspace and travel benefits that are included.

But if the law was only passed after a Senate trial in which Mr. Trump was convicted, Vladeck said Mr. Trump could argue that the statute couldn’t constitutionally be applied to him because it didn’t exist when the Senate considered his case.

Steven Portnoy and Arden Farhi contributed to this article.