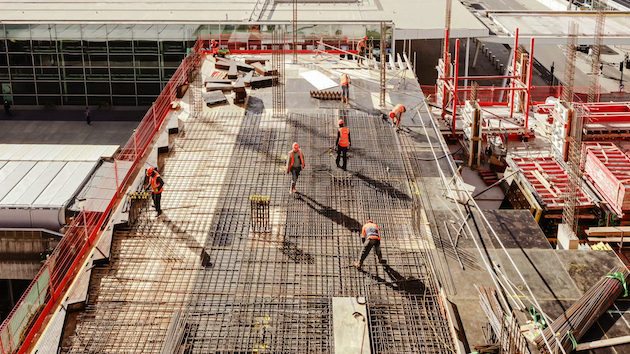 Its product Nexiite, a proprietary material that allows for rapid construction, is a near-zero carbon alternative to cement, a highly carbon-intensive material.

Greenhouse gas emissions are a big issue in construction. The 2019 Global Status Report for Buildings and Construction found that 39% of carbon emissions in 2018 came from buildings and construction, 11% came from manufacturing materials such as steel, glass, and cement.

Nexii CEO Stephen Sidwell tells ABC Audio there needs to be a new way of constructing buildings to help slow climate change and support a growing population around the world.

Nexii’s goal is to build near net-zero or net-zero buildings, meaning the buildings will produce as much or nearly as much energy as it uses each year.

Embodied carbons are the sum of all the greenhouse gas emissions involved with the construction of a building, including the mining, manufacturing, or any transportation of any materials.

The company can build brand new buildings or do retrofits of existing ones. To date, they have completed 10 buildings, including retrofits.

The product is manufactured off-site, then shipped to the building site leading to faster building times.

Sidwell said a retrofit could include a high-performance envelope system around the outside of an existing building.

“You can essentially think of us as almost like we can put a fleece-lined rain jacket over a building at a cost-effective, artistic, beautiful way,” said Sidwell.

He adds that retrofitting old buildings will be key to addressing energy consumption in buildings and that the retrofit market is expected to be three to five times larger than the new construction market.

The company has been working with the Rocky Mountain Institute, a non-profit working to transform global energy, on retrofitting solutions in the United States.

Sidwell says the buildings are fire and water-resistant and that they’ve gone through seismic testing at UC-Berkeley.

“If the bathtub leaks on the sixth floor all the way to the basement, you’re not going to be worried about how much water damage there is. None of the materials that we use are biodegradable. There’s no potential for mold, mildew, rot, or insect devastation,” said Sidwell.

Even though Nexii is a high tech solution, customers will still see savings.

Currently, Nexii has one plant in Squamish, British Columbia, but they are building several plants around Canada and the United States, including in Vancouver, Canada that should be operational in February and one in Pennsylvania, which Sidwell says will be operational by the end of the second quarter of 2021.

He believes each plant will be able to produce about 100 buildings, depending on the size, each year once they are completely up and running.

Sidwell says they have also created a global licensing program that will allow plants to be built internationally.

“We have had discussions with developers [and] building material companies literally around the world. And we are intending next year to start our global expansion strategy at the same time,“ said Sidwell.