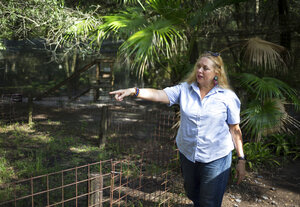 FILE - In this July 20, 2017, file photo, Carole Baskin, founder of Big Cat Rescue, walks the property near Tampa, Fla. The family of Don Lewis, a Florida man who disappeared in 1997 and who appeared on the hit TV series “Tiger King,” has hired a lawyer and is offering $100,000 in exchange for information to help solve the case. Attorney John Phillips held a news conference Monday, Aug. 10, 2020 and announced the investigation into Don Lewis’ disappearance. (Loren Elliott/Tampa Bay Times via AP, File)

ORLANDO, Fla. (AP) — Carole Baskin, who became a pop culture sensation due to Netflix’s docuseries “Tiger King,” is being sued for defamation by a former assistant. As part of the lawsuit, the daughters of Baskin’s former husband are seeking more information about what happened to their father, who disappeared mysteriously more than two decades ago.

The amended complaint to an earlier lawsuit was filed Tuesday in state court in Tampa by Don Lewis’ three daughters, Donna Pettis, Lynda Sanchez, and Gale Rathbone, as well as his former assistant, Anne McQueen. It also names Baskin’s current husband and her tiger rescue sanctuary as defendants.

The lawsuit said that Baskin defamed McQueen by posting a video diary entry on YouTube earlier this month in which she says McQueen played a role in Lewis’ disappearance. Those statements and embezzlement allegations also were made on Baskin’s website, “bigcatrescue.org,” the lawsuit said.

The lawsuit also is seeking what is known as a “pure bill of discovery,” which allows information in a case to be gathered before a civil complaint is filed.

“Despite contentions to the contrary, the truth has never been explored in any court and there is a good faith basis to believe the truth will open up many viable remedies,” the lawsuit said.

The pure bill of discovery “will be useful to identify potential defendants and theories of liability and to obtain information necessary for meeting a condition precedent to filing suit,” the lawsuit said.

The documentary is about Joseph Maldonado-Passage, also known as “Joe Exotic,” a former Oklahoma zookeeper. He was convicted of trying to hire someone to kill Baskin, who had tried to shut him down, accusing the Oklahoma zoo of abusing animals and selling big cat cubs.

In retaliation, Maldonado-Passage raised questions about Lewis’ disappearance. The documentary extensively covered Maldonado-Passage’s repeated accusations that Baskin killed her husband and possibly fed him to her tigers. Baskin, who founded Big Cat Rescue, has never been charged with any crime and released a statement refuting the accusations made in the series.

Baskin, who is a contestant on the show, “Dancing With The Stars” this season, said nothing when judges of the TV dance competition made references in jest to the belief that Lewis was killed and fed to the tigers at her sanctuary, the lawsuit said.