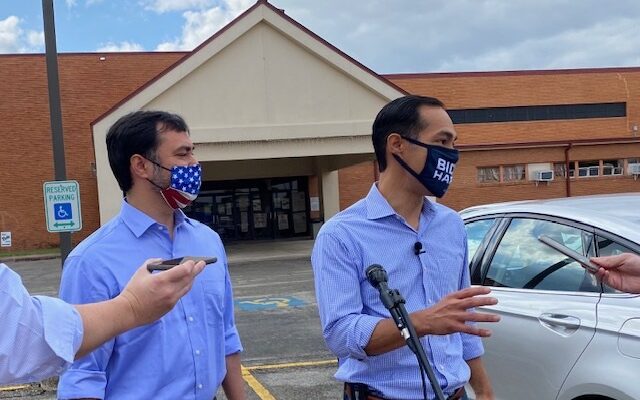 SAN ANTONIO (KTSA News) – They’re twins.  They’re both lawyers and politicians.   Monday, former San Antonio Mayor and ex-HUD secretary Julian Castro and his twin brother, Congressman Joaquin Castro, went together to cast their early voting ballots at St. Paul Community Center near the West Side neighborhood where they were raised.

The twins were wearing light blue shirts as they talked about the possibility of  turning Texas blue.  Bexar County isn’t the only Texas region that’s seeing record early voting turnouts, and  Julian Castro thinks he knows why.

“There’s a high voter turnout because people know that we need a change. People that have been sitting on the sidelines for years have decided to get into the voting booth this time because they see that we desperately need a new president,” said Castro.

He noted the importance of Texas in this election with the polls showing President Trump and Joe Biden in a close race.  Vice presidential candidate Kamala Harris will campaign in the Lone Star state Friday, the last day of early voting.

“Texas is a swing state,” said Julian Castro, who ran an unsuccessful bid for the Democratic nomination for president. “What it says that Senator Kamala Harris is going to be in Houston and Fort Worth is that this is a competitive state and it’s very close.”

Congressman Joaquin Castro slammed President Trump for his handling of the pandemic.   In the parking lot outside the St. Paul Community Center, he told reporters that his stepmother, Alice, was one of more than 220,000 Americans who died after contracting COVID-19.

“My Dad, at 80 years old, dropped his wife off at the hospital on his 80th birthday and that was the last time that he saw her. That was the last moment that he spent with her,” said Joaquin.

President Trump remained defiant in his handling of the pandemic despite another White House outbreak.

“We’re rounding the turn. You know, all they want to talk about is COVID,” Trump said at a rally in Pennsylvania. “By the way, on November 4th you won’t be hearing so much about it. COVID, COVID, COVID, COVID.”

Joaquin is urging Texans to get out and vote.

“Hopefully, we’ll wake up Tuesday with a new President, a new Senator, and we’ll be able to flip the State House and pick up congressional seats in Texas,” he said.

Joaquin is being challenged by Republican Mauro Garza in his reelection bid for the 20th Congressional District. He ignored Garza’s supporters who were holding a large sign that read,” Joaquin Castro, you’re fired.”