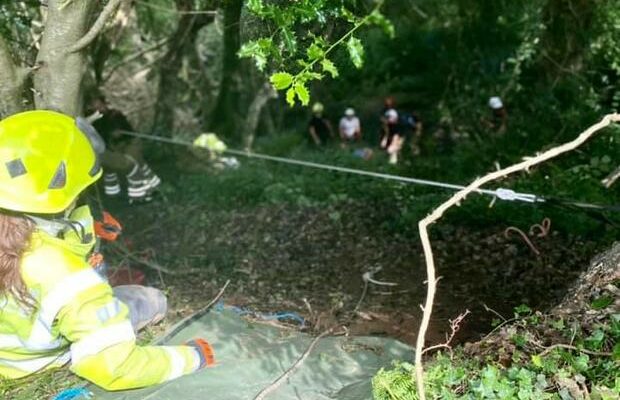 Rescuers used a stretcher to pull the 83-year-old up the 70-foot ravine. Bodmin Police

When a 83-year-old woman fell down a ravine in Cornwall, England, it was her cat who helped rescuers find her.

The woman had been missing for over an hour, and concerned neighbors called emergency services, BBC News reports. Police went searching for her, but it was a member of the public who heard a meowing cat and located her.A passerby heard the cat, Piran, meowing loudly, which alerted them to the woman. Rescuers then saw the woman had fallen 70 feet into a stream, “with incredibly difficult access and uneven terrain,” according to BCC News.

Rescuers lifted the woman up the ravine on a stretcher and flew her to a hospital in an air ambulance. She is in stable condition.

An eyewitness said the key to finding the woman was Piran’s “quite persistent” meowing at the top of the ravine. “It’s a massive ‘well done’ to all the emergency services who worked together and to Piran,” the unnamed witness said. “The outcome could have been a lot worse.”

Bodmin Police, who helped in the rescue, agreed. “Piran the cat saved the day,” police said. On Monday, the police department shared an update: “Whilst the lady concerned is still currently receiving care, she is in good spirits and is being well looked after.”