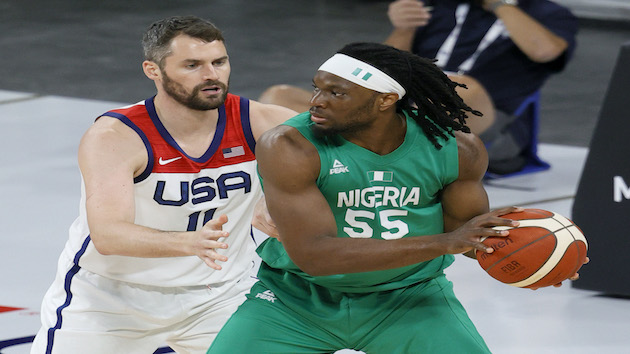 LAS VEGAS, NEVADA - JULY 10: Precious Achiuwa #55 of Nigeria is guarded by Kevin Love #11 of the United States during an exhibition game at Michelob ULTRA Arena ahead of the Tokyo Olympic Games on July 10, 2021 in Las Vegas, Nevada. Nigeria defeated the United States 90-87. (Photo by Ethan Miller/Getty Images)

“I am incredibly disappointed to not be heading to Tokyo with Team USA,” Love said in a statement released by his agent Jeff Schwartz, “but you need to be at absolute peak performance to compete at the Olympic level and I am just not there yet.”

Love has been recovering from a calf injury that forced him to miss most of last season. He spent the past ten days with the team preparing in Las Vegas.

Team USA, which is going for its fourth straight Olympic gold medal, will now have to replace a second player. Washington guard Bradley Beal was placed in health and safety protocols and was forced to drop out of the games.

Detroit guard Jerami Grant was also put into protocol “out of an abundance of caution.”

Out of an abundance of caution, the USA Men’s National Team exhibition versus Australia on Friday has been cancelled.

The USA Women’s National Team’s matchup with Australia will be played at 2:30 PM ET on NBCSN.