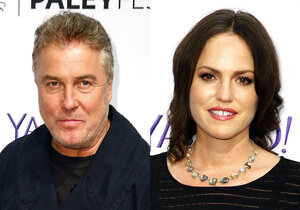 “CSI: Vegas” will debut this fall alongside the network’s expansion of its “NCIS” and “FBI” drama franchises, CBS said Wednesday in unveiling its 2021-22 schedule for advertisers and media.

“NCIS: Hawai’i,” starring Vanessa Lachey, will be paired Monday night with “NCIS,” entering its 19th season with star Mark Harmon. “FBI: International” will be bookended on Tuesday by family members “FBI” and “FBI: Most Wanted.”

Peterson and Fox’s characters, who were based in Las Vegas in the original 2000-2015 “CSI” that spawned a trio of spinoffs, will join ranks with a new team of forensic crime-busters led by Paula Newsome (“Chicago Med”).

“We’re very excited to have three new franchise shows come on, which we know are going to help the schedule everywhere” they’re placed, said Kelly Kahl, president of CBS Entertainment. A freshman series with a family pedigree gets a leg up, he said.

Another fall newcomer is the comedy “Ghosts,” about the new owners (Rose McIver, Utkarsh Ambudkar) of a country estate that comes with spirits described as “eclectic.” It’s based on a eponymous British series, a critical darling.

Midseason shows will include the medical drama “Good Sam,” with Sophia Bush and Jason Isaacs; the comedy “Smallwood,” starring Pete Holmes, Katie Lowes and Chi McBride and based on pro bowler Tom Smallwood’s second-act career, and the reality show “Come Dance With Me.”

An unusual entry is “The Activist,” described as a competition series in which teams try to bring “meaningful change” in the areas of health, education or the environment. The goal: to seek funding and awareness from world leaders at an international summit.

The drama “All Rise” and comedy “The Unicorn” have been canceled.

Two CBS series will be making the jump to streaming on Paramount+, the network’s ViacomCBS corporate sibling. Dramas “Evil” and “Seal Team” will be available only on the service, although the latter will air four episodes on CBS this fall before its time slot goes to another series.