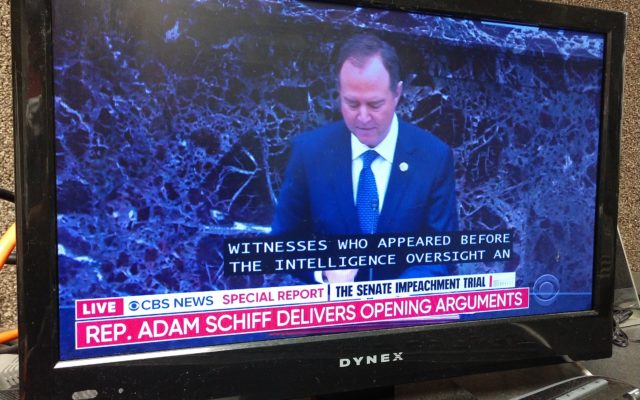 NEW YORK (AP) — CBS was the first major network to break away from President Donald Trump’s impeachment trial in the Senate on Tuesday, allowing its viewers to watch their regular afternoon fare instead of a debate over a proposed amendment to subpoena White House documents.

The decision illustrated the on-the-fly judgments television executives will face every day of the trial, juggling concerns over millions of dollars in advertising revenue, news purists cognizant of the weight of history and angry soap opera fans.

Uncertainty over the Senate’s schedule from hour to hour, much less day to day, complicates things even further.

The decisions were easier when ABC, CBS and NBC dominated the landscape and were very cognizant of their public service responsibility. Now viewers have options — cable networks from CNN to C-SPAN and streaming services — if they want to follow the trial. While Tuesday’s session was historic, opening the third impeachment trial ever in the United States, it will still a while before the meat of the case was examined.

Yet it was noticed when CBS cut off the trial around 3:15 p.m. ET, while rivals ABC and NBC stuck with it.

Tweets of incredulity at CBS for abandoning history mixed with those from angry daytime TV fans. “Why do you have impeachment on all platforms?” tweeted one viewer, who was more interested in watching “The Young and the Restless” and “The Bold & The Beautiful.”

A CBS representative noted that the network’s news streaming service was continuing to carry the trial, and that network affiliates were given the choice to continue to show the Senate if that’s what their executives preferred.

Rivals at ABC and NBC privately noted that the fact that it was the trial’s opening day played into decisions to stick with it longer. Fox’s broadcast network, which doesn’t have its own news division, infrequently breaks away from traditional programming.

All of the the broadcast networks had contingency plans in place depending on what was being shown and the time of day. There was little interest in making public pronouncements of their plans given the fluidity of the situation.

“These decisions are difficult and they’re not always solely in the hands of the news divisions,” said Mark Lukasiewicz, a former NBC News executive and now dean of Hofstra University’s School of Communication. Network entertainment and corporate executives also weigh in.

Sticking with news coverage becomes more difficult for the networks in the prime-time hours of 8 to 11 p.m., because that means a more significant loss of advertising revenue, Lukasiewicz said.

That’s why network executives were keenly interested in Senate Majority Leader Mitch McConnell’s decision Tuesday that impeachment managers for the House and president would have three days instead of two to make their cases. It means fewer hours in prime time are likely to be chewed up.

There were no such tough decisions at the cable networks CNN, Fox News Channel and MSNBC. Each carried virtually every minute of House hearings and votes on impeachment, and are expected to do the same with the trial. It’s a winner for them financially; all cable news ratings soared during the House proceedings.

On Tuesday, CNN was already using its programming choice in advertising.