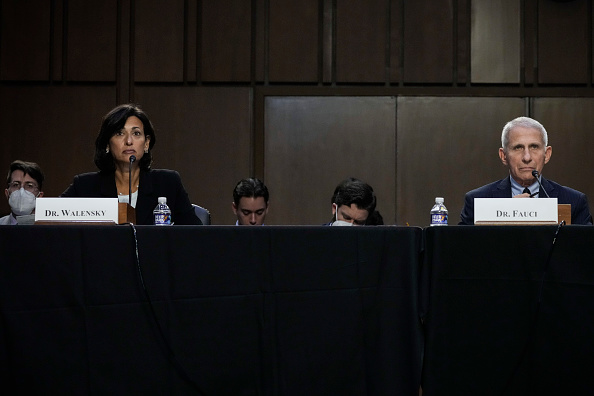 WASHINGTON, DC - SEPTEMBER 14: (L-R)  Centers for Disease Control and Prevention Director Dr. Rochelle Walensky and Dr. Anthony Fauci, director of the National Institutes of Allergy and Infectious Diseases, testify during a Senate Committee on Health, Education, Labor and Pensions hearing about the federal response to monkeypox, on Capitol Hill September 14, 2022 in Washington, DC. The U.S. is working to contain the largest monkeypox outbreak in the world, with more than 22,600 cases across all 50 states. (Photo by Drew Angerer/Getty Images)

“There have been millions,” Walensky said ahead of the CDC’s official release of the data.

Walensky, after receiving her shot of Moderna’s bivalent booster at a CVS location in Brookline, Massachusetts, urged others to join her in getting the vaccine, stressing that it is critical to get vaccinated ahead of the fall and winter, in order to prevent severe disease.

“I’m here getting my updated fall vaccine because I think it’s critically important to do,” Walensky said.

“All the data from this new bivalent vaccine have demonstrated that it will protect you against — more likely protect you — against the strains that we have circulating right now, those Omicron BA.5 strains, as well as keep you well protected, because we’ve seen that some of that protection can wane over time. So, we are really encouraging everybody to roll up their sleeves and get this updated bivalent vaccine,” she said.

In recent months, vaccination and booster uptake has slowed significantly, with fewer Americans willing to get their shots. As of Sept. 14, approximately 109.2 million Americans have received their first booster — representing less than 50% of those who have been fully vaccinated.

Walensky reiterated that she is still strongly encouraging parents to get their children vaccinated and boosted.

“We will wait to see what the FDA says about an updated booster vaccine for 5- to 11-year-olds, and we’ll make some decisions soon thereafter,” she said.

On the heels of President Joe Biden’s remarks during his appearance on CBS’ “60 Minutes” on Sunday, when he stated that “the pandemic is over,” Walensky said that the U.S. is certainly in a “very different place” than one or two years ago, thanks to prior vaccination coverage.

Walensky was reluctant to directly agree with the president’s assertion that “the pandemic is over,” but with hospitalization and case rates falling, and vaccines and treatments available, “we’re in a different place,” she said.

“I think if we look at the big picture, things are very different,” she said. “We’re in a different place. Schools are open and businesses are open. We have a lot of population immunity out there right now.”

However, Walensky noted that even though there are currently fewer Americans dying from the virus on a daily basis, hundreds of Americans are still dying of COVID-19 every day — a fatality rate that remains too high.

Although reported COVID-19 infection rates have remained stable in recent weeks, there are preliminary indicators that the presence of COVID-19 in wastewater levels has increased in some parts of the country. In the greater Boston area, where Walensky received her shot, viral sampling in local wastewater has reached its highest level since July.

Ahead of the fall, the CDC is also closely monitoring the genomic surveillance to surveille the potential emergence of any new variants of concern.

“We will be ready to step up to the plate,” Walensky said, adding that the vaccines will “hopefully not” have to be amended.

“We’ve seen time and time again is [that] our vaccines are working pretty well against severe disease, hospitalization and death, even when variants emerge, which is why it’s so very important to go ahead and get your updated vaccine now,” she said.

There are also growing concerns among health officials over the potential of a severe influenza season, prompting Walensky to remind Americans to “protect yourself” now, in order to “prevent getting sick in the future,” by also getting a flu shot in addition to the new COVID-19 booster.

“We know over the last several years is some people did not elect to get their flu shot,” Walensky explained. “We’ve had decreased rates of flu over the last several years and probably due to many of the mitigation strategies that we have in place for COVID. When that happens, we have decreased levels of population immunity, which raises the concern that the next year, you might have a higher, larger flu challenge. We can’t predict what a flu season will look like, but we have concerns.”