Census: Rethinking how to count people in dorms, prisons 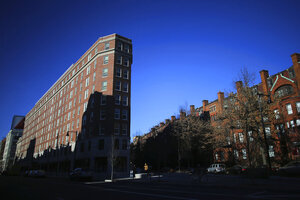 FILE - In this Jan. 17, 2019 file photo, Boston University's Myles Standish Hall dormitory, left, is partially covered in shadow in Boston. THe Massachusett Tribe at Ponkapoag is calling on BU to change the name of the dorm that honors Myles Standish, the military leader of the Pilgrims. The tribe says Myles Standish Hall should be renamed Wituwamat Memorial Hall after a leading Native American figure massacred with other tribal members by Plymouth Colony settlers in 1623. (Lane Turner/The Boston Globe via AP, File)

Following a 2020 census in which the pandemic made access to group housing difficult, Census Bureau officials said Thursday they are going to reassess how they count people living in dorms, prisons and nursing homes in the next head count of every U.S. resident in 2030.

The Census Bureau is going to rethink how residents of group quarters are accounted for, though it’s too early at this point to say how that will be done, Al Fontenot, an associate director of the Census Bureau, told members of a scientific advisory committee during a virtual meeting.

The pandemic hindered the Census Bureau’s ability to get information about such residents since students on campus were sent home when the pandemic began in the U.S. in March 2020, and prisons and nursing homes went into lockdowns against the spread of the coronavirus.

In some places, such as Alaska, Hawaii the District of Columbia, information about residents’ race originally was left blank in more than half of group quarter housing, a significant increase over decades past. Nationally, that rate was 30.2%, up from 18.1% in 2010.

The rise in blank answers for residents of group quarters “certainly raises eyebrows,” said Mario Marazzi, the former former executive director of the Puerto Rico Institute of Statistics, who is a member of the advisory committee.

Though people living in group quarters account for a small share of the overall population — under 3% of the 331 million people living in the U.S. — any inaccurate information can have a big impact on college towns or areas with a large prison population or a military base. That in turn can diminish representation in Congress and the amount of federal funding they are eligible to receive.

The group housing count is under added scrutiny this census because the Census Bureau, for the first time, decided in the middle of crunching numbers to use a last-resort statistical technique called imputation to fill in the data gaps for dorms, nursing homes and prisons. The method has been used for some time to fill in missing information on individual households.

Despite the challenges posed by the pandemic to the 2020 census, Census Bureau officials told members of the scientific advisory committee that the quality of the census data is on par with the data collected in 2010.

The Census Bureau is trying to evaluate which operational challenges during the 2020 census were due to the pandemic or just due to regular operations. But one thing seems certain — residents of homes visited by census takers were less likely to talk in 2020 than in 2010 because of the pandemic, Fontenot said.

“They tried to give them the minimal answers possible to get them to go away,” Fontenot said. “In 2010, we might have had longer conversations. In this case, you got a short answer and the door closed. In many ways, this was pandemic-related. People had a lot of resistance to talking to a stranger at their front door.”