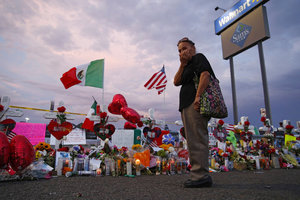 FILE - In this Aug. 6, 2019 file photo, Catalina Saenz wipes tears from her face as she visits a makeshift memorial near the scene of a mass shooting at a shopping complex in El Paso, Texas. El Paso is marking the year anniversary of the a shooting at a crowded Walmart by remembering the 23 people killed. Authorities have said the gunman traveled from his home near Dallas to target Latinos in the Texas border city on Aug. 3, 2019. (AP Photo/John Locher, File)

EL PASO, Texas (AP) — Twenty-three pillars of light shot into a cloudy El Paso sky to commemorate the lives lost during a shooting that targeted Mexicans at a Walmart one year ago — a memorial visible from both sides of the US-Mexico border.

The white beams stood out against the orange glow of the border lights Sunday night as people lit paper lanterns and played music in a park in a ceremony marking a year since the attack. There was a service for the families of the victims, but the gathering was closed to the public.

Events to commemorate the shooting in El Paso, and another hours later that killed nine people in Dayton, Ohio, have been reshaped by the coronavirus. The pandemic has added peril to the kind of gatherings that would have otherwise marked the grim anniversary, but did not stop the largely Hispanic city of 700,000 from showing unity.

On Monday, the Walmart where the shooting took place delayed opening until noon. Residents and store employees wearing masks laid flowers and lit candles at a monument. After sundown, a star of lights is set flash once for each of the victims on the mountains that overlook the city.