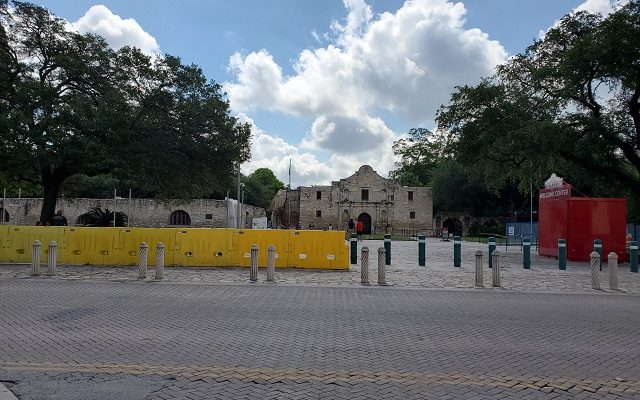 Chain link fence being installed at the Alamo, June 3, 2020-Photo-Courtesy of the Alamo

SAN ANTONIO (KTSA News) – More than a dozen people have been arrested since Saturday as peaceful protests in San Antonio have ended in riots and looting.  The demonstrations across the country have erupted since the death of George Floyd, A Minneapolis police officer has been charged with murder after holding his knee on Floyd’s neck

Eight individuals were arrested Tuesday night  in San Antonio after protests at the Bexar County Courthouse led to a march to the downtown Public Safety Headquarters .  At times, the protesters ran through the streets and parking lots as they made their way back to the Alamo.  They they blocked the access road of IH 37 before going near Alamo Plaza, which is closed nightly as the demonstrations continue.  Policed say glass bottles were thrown at them , and they fired back with pepper balls and wooden and rubber bullets.

Here are the names and charges against those arrested in connection with the disturbances Tuesday night .

27-year-old Priscilla Gonzales-pedestrian in the roadway

Seven were arrested Saturday night, and four of those individuals were charged with rioting.  All but one of the suspects arrested since Saturday are San Antonio residents.  One man is from Uvalde.

A temporary chain link fence was being installed around the Alamo as the disturbances continue.

A  curfew remains in place at Alamo Plaza from 8:30 pm  to 6 a.m. The nightly closures will continue through Sunday.