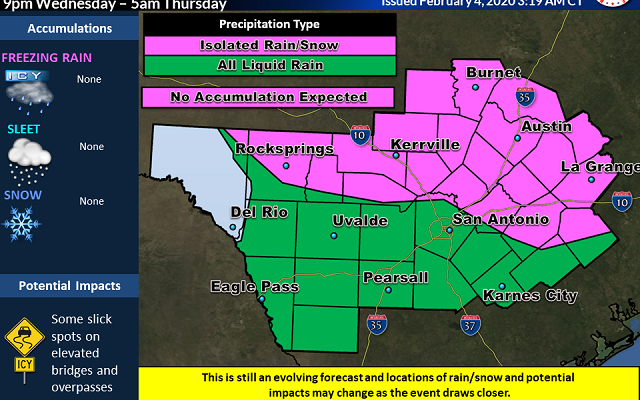 SAN ANTONIO (KTSA NEWS)- A cold front will arrive in San Antonio late Tuesday into early Wednesday, bringing rain to our area.   Meteorologist Brett Williams says we’ll get some rain, but areas of the northern Hill Country and northern  Edwards Plateau are expected to get freezing rain.  Light ice accumulations are possible on elevated surfaces in those areas.  There’s no snow in the forcecast, but Thursday’s a different story, at least in the current forecast. 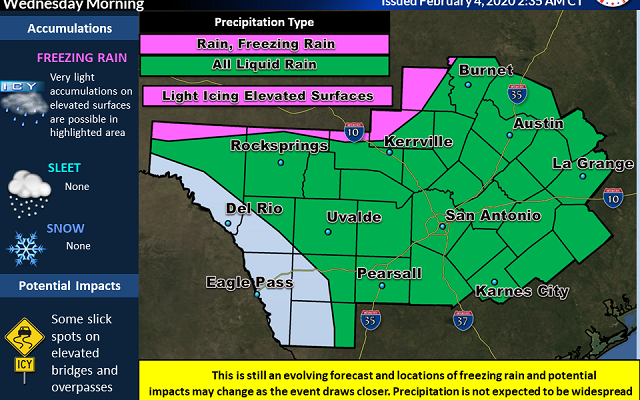 Williams says a second round of winter precipitation is possible Wednesday night and extends farther south including the Austin metro area and the northern part of Bexar County.

“Thursday morning , as temperatures finally get down to near freezing, it’s possible we could see some snow mixed with rain,” said  Williams. “Looking at our current forecast, basically we keep the possible snow mix in the far northwestern and northern portions of Bexar County.”

The chance of snow mixed with rain continues up into the Hill Country, including Kerrville, Rocksprings and Burnet, as well as Comal County, La Grange and the Austin area.