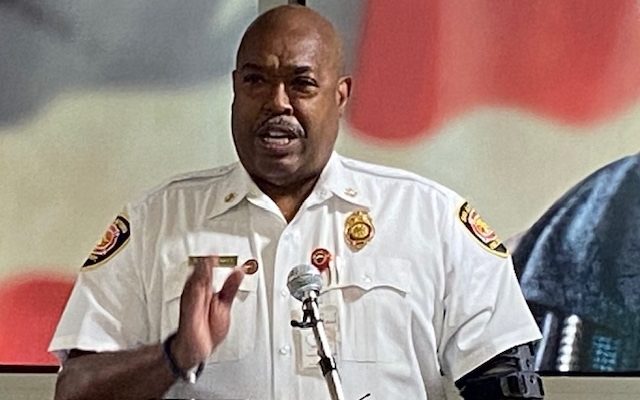 SAN ANTONIO (KTSA News) –  San Antonio’s first black fire chief recalls several decades ago when he was a paramedic on a medical call in Phoenix.  A man he was trying to help said ,” Son, I’m a Georgia peach. Where I come from, blacks don’t do medicine.”

“I was one of the best paramedics in the freakin’ Phoenix fire department,” said Hood.

Fighting back tears, he  recalled how his captain quickly came to his defense and told the man,”If he’s not good enough to work on you–and he’s one of the best we have–then we’re not good enough for you either.”

That’s just one of the times he’s dealt with bigotry and racism. He talked about it during a news conference where he was recognized for being named Fire Chief of the Year by the Metropolitan Fire Chiefs Association.  The annual conference and awards ceremony were canceled because of the COVID-19 pandemic, so Mayor Ron Nirenberg and City Manger Erik Walsh presented Hood a certificate.

It was a double celebration Tuesday.  The San Antonio Fire Department also received the Excellence in Fire Service-Based EMS Award from the Congressional Fire Services Institute.   SAFD was honored for developing a program that administers whole blood transfusions to patients in the field.

Hood said he was humbled to receive the awards, and when questioned about the Black Lives Matter movement and the protests over the death of George Floyd in Minneapolis, Hood said he’s obligated to speak out about social injustice.

He and two of his four sons who are visiting from Colorado have participated in three Black Lives Matter protests, which he said were diverse and peaceful.  He said all lives matter, but to understand the Black Lives Matter movement you have to walk in his shoes and look through his lens.

Hood will never forget when he was a child and his uncle took him for a ride in his new silver Cadillac in 1968.   Two police officers in that Los Angeles suburb pulled him over and questioned him about the vehicle.   His uncle instructed him to put his hands on his lap, look forward and be quiet.   The car belonged to his uncle, but they pulled him over and questioned him because he was black.

That was more than 50 years ago and Hood says he still worries when he’s driving in other parts of Texas and sees those flashing lights.  He has talked to his sons about how to act around police officers and he hopes things will be different when they have sons.

“As long as I’m here and I have a voice, I feel obligated to say something. Black lives are precious. These young men are precious, he said, pointing to his sons.

Hood says there’s no tolerance for hatred in the San Antonio Fire Department.

“You can’t have hate and provide the kind of service that each and every one of you deserves,” said Hood.