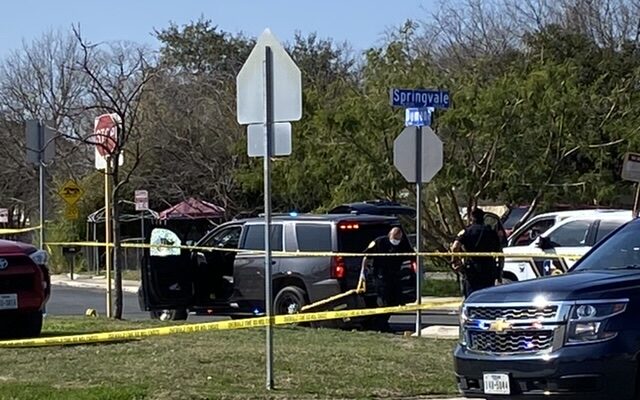 SAN ANTONIO (KTSA News) – A chase that started with a traffic stop in Atascosa  County  Tuesday ended in a shootout with the suspect outside an elementary school in Southwest Bexar County around 11 Tuesday morning.

The suspect, who had a parole violation, was rushed to a hospital with multiple gunshot wounds. Bexar County Sheriff’s Deputy Johnny Garcia says the same officers who were fired at by the suspect performed life-saving measures on him until EMS arrived.

The driver’s side window and windshield of an unmarked BCSO vehicle on the street outside Jerry Allen Elementary School on Springvale were shattered. The suspect’s pickup truck had tire damage from spikes that were placed on the road by officers.  For the last several miles of the chase, the man’s truck was on two wheels until he stopped outside the school and started shooting.

Jerry Allen Elementary in the Northside Independent School District remains on lockdown as the investigation continues. Garcia says four law enforcement agencies —Pleasanton Police Department, Atascosa County Sheriff’s Office, Texas Department of Public Safety and BCSO— were  involved in the chase. It started with a traffic stop for a moving violation. The passenger was arrested in Pleasanton, but the driver fled with officers in pursuit.