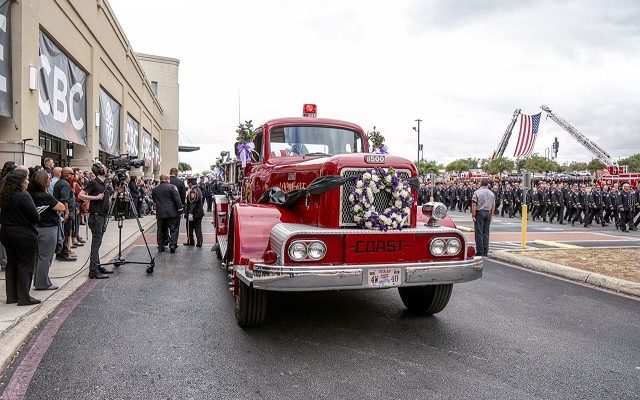 SAN ANTONIO (KTSA News) – San Antonio firefighter Greg Garza, who was killed in the line of duty last week,  has been laid to rest in a private interment service following a Catholic Mass at Community Bible Church Thursday afternoon.

“Greg leaves a legacy of service, commitment and heroism that will continue to inspire us as we go about our calling, protecting the people of the Alamo City,” said Hood.

Father Jimmy Drennan, a former San Antonio police officer who became a priest said Garza “belonged to all of us,” and he thanked Garza’s family for “sharing him with us.”

Garza graduated from Central Catholic High School and served in the Marine Corps.   He earned a psychology degree from the University of the Incarnate Word and  joined the San Antonio Fire Department 17 years ago. The program for his funeral included a background of transformers and kittens because he enjoyed collecting toys and was known to feed stray cats around the fire station.

Garza died October 15 while responding to an electrical fire at an East Side hotel.  Garza was retrieving some equipment from a fire truck when he stumbled  and fell off the apparatus.  He was hit by a van and died at San Antonio Military Medical Center.

After the Mass Thursday, an outdoor ceremony featured bagpipes and drums from various fire departments and the San Antonio Police Department. A San Antonio police officer and a San Antonio firefighter teamed up for the playing of echo taps. There were 21 rifle volleys, the ringing of the fire department bell, a police helicopter flyover and the final radio call.

At the conclusion of the ceremony, a few raindrops fell on Garza’s friends, family and hundreds of first responders who were there to bid a final farewell to the fallen firefighter.