Chiefs lean on D to stuff Prescott, Cowboys in 19-9 win 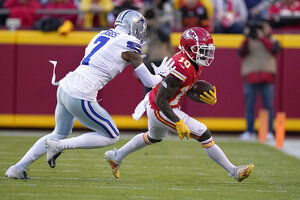 KANSAS CITY, Mo. (AP) — Clyde Edwards-Helaire ran for 63 yards and a touchdown in his return from injured reserve, Chris Jones and the Kansas City defense made life miserable for Dak Prescott, and the Chiefs beat the Dallas Cowboys 19-9 on Sunday.

Patrick Mahomes was 23 of 37 for 260 yards with an interception and a fumble for Kansas City, but he was bailed out by a defense that played its best game of the year. Charvarius Ward picked off Prescott in the end zone near the end of the first half, and Chris Jones had 3 1/2 sacks while forcing and recovering a fumble.

The result: The Chiefs (7-4) improved to 4-0 against the NFC East with their fourth straight win overall.

Prescott was held to 216 yards passing and two interceptions for the Cowboys, though he was missing a whole lot of help. Left tackle Tyron Smith missed his third straight game with an ankle injury, Amari Cooper tested positive for COVID-19 and fellow wide receiver CeeDee Lamb sustained a concussion just before halftime.

Ezekiel Elliott, who appeared to tweak his ankle early in the game, finished with nine carries for 32 yards. Linebacker Micah Parsons was the biggest highlight for the Cowboys (7-3), forcing a fumble and piling up three more sacks.

The Chiefs have hit their stride after a rough first seven weeks that left them 3-4 and last in the AFC West. They’ve eliminated many of the turnovers and penalties that hamstrung their offense, and a defense that was historically inept in September and October has turned into a ferocious, ball-hawking bunch in November.

Just ask Prescott, who spent a good part of Sunday running away from it.

Mahomes followed up a 406-yard, five-touchdown performance against the Raiders by dicing up the Cowboys in the first half. He led Kansas City on an 86-yard march that ended with Travis Kelce taking a direct snap for a touchdown, then he led a 65-yard drive a few minutes later that ended with Edwards-Helaire’s short TD run.

All the Cowboys managed was Greg Zuerlein’s field goal and they trailed 16-3 at the break.

Zuerlein hit two more in the second half, and Harrison Butker added another field goal for Kansas City as the teams traded silly mistakes that kept them from reaching the end zone. Mahomes had a pass bounce off Kelce’s hands for another interception, and the Cowboys had a promising drive go haywire after a false-start penalty.

The Chiefs’ resurgent defense made sure the Cowboys never got within one possession the rest of the way.

The teams nearly came to blows late in the first half when the Cowboys’ Kelvin Joseph ripped the helmet off Rashad Fenton, who in turn began taunting the Dallas sideline. Both players were flagged for offsetting penalties.

Cowboys: Lamb was hurt going up for a jump ball in the end zone near the end of the first half. Ward picked it off and Lamb landed hard. He was helped by trainers to the locker room and did not return. … FS Donovan Wilson left with a shoulder injury in the fourth quarter.

Chiefs: Chiefs FS Tyrann Mathieu was added to the injury list as questionable about three hours before kickoff. But after working with trainer Rick Burkholder before the game, the three-time All-Pro pronounced himself ready to go. … RB Jerick McKinnon hurt his hamstring in the first quarter. … Fenton hurt his right knee in the fourth quarter.

The Cowboys return home to play against the Raiders on Thanksgiving Day.

The Chiefs finally get their week off before playing the Broncos on Dec. 5 in the first of three straight divisional games.