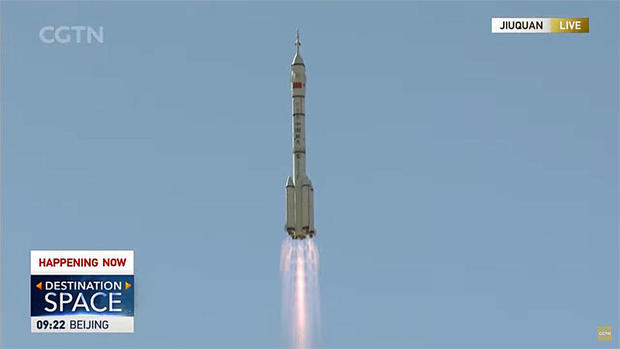 A Long March 2F rocket climbs away from the Jiuquan Satellite Launch Center in northwest China, boosting the Shenzhou-12 spacecraft and three Chinese astronauts into orbit for a flight to the Tianhe space station core module. CGTN webcast

Three Chinese astronauts blasted off and rocketed into orbit Thursday, setting off after the recently-launched core module of China’s new space station for a planned three-month stay.

The Shenzhou-12 flight, China’s seventh piloted space mission and the first to carry a crew to the new space station, came less than three weeks after the May 29 launch of unpiloted cargo ship that brought needed supplies and equipment. The core module — Heavenly Harmony — was launched April 29.

“We need to arrange our home in the core module, then get started on a whole range of diagnostic tests on crucial technology and experiments,” mission commander Nie Haisheng said during a pre-flight news conference. “My colleagues and I will cooperate closely, operate carefully and overcome all difficulties.”

Making its 15th flight, the Long March-2F rocket thundered to life at the Jiuquan Satellite Launch Center in northwest China at 9:22 a.m. Thursday (9:22 p.m. EDT Wednesday), shooting away through a clear blue sky atop a long jet of flaming exhaust.

Joining Nie aboard the Shenzhou spacecraft were Liu Boming and Tang Hongbo. Nie has two previous flights to his credit in 2005 and 2013 while Liu flew in 2008, participating in China’s first spacewalk. Tang joined the Chinese astronaut corps in 2010 and is making his first flight.

Television views inside the cockpit showed all three crew members as they monitored cockpit displays, looking relaxed and in good spirits as the accelerating rocket pushed them back in their seats in a fully automated ascent.

About nine minutes and 40 seconds after liftoff, the Shenzhou-12 spacecraft separated from the rocket’s upper stage. A series of rendezvous rocket firings enabled it to catch up to Tianhe and dock with it about six hours after liftoff.

“Honorable leaders, comrades, according to reports from the Beijing Aerospace Control Center, the Long March-2F rocket has sent the Shenzhou-12 manned spacecraft to the preset orbit,” said Zhang Zhifen, director of the Jiuquan Satellite Launch Center. “The solar panels unfolded functionally, successfully, and I now declare the launch of the Shenzhou-12 mission a complete success.”

While smaller than the sprawling International Space Station, built by the U.S., Russia, the European Space Agency, Japan and Canada, the Chinese Space Station will focus on the same objectives — international research and technology development.

If all goes well, two more modules will be launched next year, docking with the core module to form a T-shaped structure. Electrical power will be generated by large solar arrays and two of the modules will be equipped with small robotic arms.

“Outer space is the common wealth of people all over the world, and exploring the universe is the shared cause of all mankind,” said Ji Qiming, assistant director of the China Manned Space Agency.

“We are willing to carry out international cooperation and exchanges with all countries and regions worldwide that are committed to the peaceful use of outer space,” he told reporters before the Shenzhou-12 launch.

In the near future, after the new space station is complete, he said, “we will see Chinese and foreign astronauts taking on joint missions to the Chinese Space Station.”