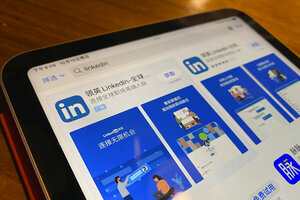 The internet App Store page showing the Chinese LinkedIn app is displayed on a device in Beijing, China, Friday, Oct. 15, 2021. Microsoft is shutting down its main LinkedIn service in China later this year as Beijing tightens its internet rules. (AP Photo/Ng Han Guan)

Come the end of the year, Liu will no longer have access to the localized version of LinkedIn, after Microsoft, which acquired the platform in 2016, said last week that it would pull out, citing a “significantly more challenging operating environment.”

“It’s a shame,” said Liu, who works in the technology industry in the southern Chinese city of Shenzhen and uses the site to network with other professionals online. “LinkedIn gave me a platform to post about my results at work, such as my achievements and promotions, which aren’t always appropriate to post on other platforms like WeChat.”

LinkedIn will be replaced in China by a jobs posting site called InJobs, without a social media feed and capability for sharing content, Microsoft said.

LinkedIn has over 54 million users in China, its second largest market after the U.S. Its departure will leave them without access to a platform for networking with professionals in other countries. There are none in China with a similar global reach.

LinkedIn is “irreplaceable,” said Liu. “Many career-related platforms like Liepin or BOSS Zhipin are purely job sites,” he said.

To access LinkedIn’s international site in the future, Liu said he would have to use a VPN (virtual private network) service to circumvent any blocks, even if it makes the process more of a hassle.

Stefan Ouyang, who works in Shanghai for a foreign internet company, said that he found two jobs via LinkedIn and often uses it to keep in contact with colleagues abroad.

“I worry if I’d still be able to reach my contacts who are using the international version of LinkedIn, and whether it’d be difficult to contact HR managers (on the new version,)” he said.

It is not clear if InJobs will retain these features, and LinkedIn did not immediately comment.

Foreign social networking platforms in China have long faced challenges in balancing users’ ability to post what they want with government rules requiring censorship of content deemed to be unacceptable for political or other reasons.

Some foreign companies, such as Google, withdrew from China as they were unwilling to abide by those rules.

“The biggest challenge that Western tech firms face in China is the same that Chinese tech firms face — an ever changing and arbitrary regulatory environment with new crackdowns, rules, and pressure to enforce the CCP’s politicized censorship and surveillance,” said Sarah Cook, research director for China, Hong Kong and Taiwan at the non-governmental organization Freedom House.

The sands have shifted, with Chinese President Xi Jinping growing “more intolerant of dissent and open conversation now than just five years ago,” she said.

It’s Chinese people who lose out as their access to the global community grows increasingly constrained, Cook said.

There are Chinese platforms that offer social networking and content features, such as Maimai, but they are not global and are typically favored by white-collar workers in China’s technology industry.

“However, the question remains whether any platform wishes to take up the moderation burden that comes with the exchange and discussion of industry news and views,” he said.

LinkedIn suspended new user registrations in March as it reviewed its compliance with local laws after coming under fire both from the authorities and from users unhappy with its regulation of content.

Last month, the company drew unfavorable attention when a U.S. journalist, Bethany Allen-Ebrahimian, complained it had censored her user profile in China over its contents. That followed several other profile censorships of several other academics and journalists on its Chinese platform.

Not everyone is sad to see LinkedIn go.

“I registered a LinkedIn account in university, but after I graduated and started working I have never used it once,” he said. “It doesn’t help my career development, unless one day I decide to join the private sector or a foreign company.”

Emchel Wu who works in advertising in Shanghai, said she rarely uses LinkedIn to network anyway.

“It’s kind of embarrassing to have all of your contacts displayed,” she said. “From when I joined LinkedIn, I have added all of four people. It hasn’t been that useful for me.”

AP researcher Chen Si in Shanghai contributed to this report.