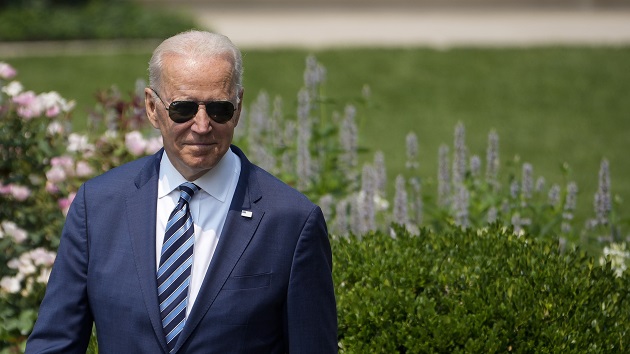 (WASHINGTON) — When President Joe Biden was sworn in six months ago, he inherited several major challenges, including a global pandemic and subsequent economic disruption, a social and racial reckoning across America, and a fractured Washington, reeling from the divisions of the Trump era.

On the campaign trail, Biden promised to bring bipartisanship back to the federal government, calling for unity in order to stem the effects of the coronavirus, rebuild the economy and foster equity and inclusion for all Americans.

“Since taking office, the president has acted to get America back on track by addressing the crises facing this nation, vaccinating America to beat the pandemic, delivering much needed help to American families, making transformative investments to rescue and rebuild our economy, and fundamentally showing that government can deliver for the American people,” White House press secretary Jen Psaki said Tuesday, marking the anniversary.

While Biden has presided over a growing economy and a retreating pandemic, there is much he hasn’t been able to accomplish, as Washington remains deadlocked without more bipartisan support from Congress for his initiatives– somethings Biden acknowledged during only the second Cabinet meeting of his administration.

“There’s much more to be done and so much more to do. Tackling voting rights, which is an existential threat to democracy right now, the things that are being passed are just beyond the pale. The vice president has been working hard on this issue and going to continue to, we all are, but there’s much more to do. We have to tackle the immigration problem, which we’re working really hard to get done in a humane and serious way. Police reform and crime,” Biden said Tuesday.

Six months into his administration, here’s a look at how successful Biden has been in pursuing some of his major initiatives.

The pandemic and the economy

President Biden oversaw an unprecedented vaccination effort to end the COVID-19 pandemic, distributing more than 200 million shots of the vaccine within his first 100 days in office.

COVID-19 cases and death rates plunged to a record low since the start of the pandemic as the effects of vaccination took hold.

“If you’re fully vaccinated, you have a high degree of protection against severe illness, hospitalization and death. If you’re unvaccinated, you are not protected. So please, please get vaccinated. Get vaccinated now,” Biden said Monday, acknowledging that cases and death rates are once again rising in the U.S.

But he failed to deliver on one major campaign promise: to secure bipartisan support for his initiatives. The COVID-19 relief package passed in Congress without a single Republican vote.

“For all of those predictions of doom and gloom six months in, here is where we stand. Record growth. Record job creation. Workers getting hard-earned breaks. Look, we brought this economy back from the brink and we’ve designed our strategy not only to provide for a temporary boost, but to lay the foundation for a long-term boom that brings everyone along,” Biden said Monday in remarks touting his economic achievement and pushing a bipartisan measure to spend $1.2 trillion improving roads, bridges and other “traditional infrastructure.”

But the fate of that is unclear in the both the Senate and House where Democrats have only a narrow majority — as is the future of legislation that would spend $3.5 trillion on “human infrastructure” such as child care that Democrats hope to push through with no Republican votes.

In those same remarks, Biden had to address inflation concerns, as rising prices across the U.S. threaten the economic optimism of reopening after the pandemic.

President Biden has struggled to stem the flow of migrants crossing the southern border of the U.S. In June, Customs and Border Patrol apprehended a ten-year record number of migrants.

Biden appointed Vice President Kamala Harris to address the root causes of migration, and Harris has traveled to Guatemala and Mexico in her efforts to encourage potential migrants to stay in their home countries and apply for asylum legally. But with corruption, drug-related violence and extreme weather plaguing many Central and South American countries, her efforts, including offering increased aid to those countries, have not led to a significant shift in migration patterns, as illustrated by the June CBP numbers.

“No matter how much effort we put in on curbing violence, providing disaster relief, on tackling food insecurity — on any of it — we will not make significant progress if corruption in the region persists,” Harris said on May 4.

Biden was successful in overturning many of President Trump’s strict immigration policies. He ended Trump’s so-called “Muslim ban” that prevented people from traveling from several Muslim-majority countries to the United States. Biden also returned deportation priorities to the status quo in the Obama administration, which focused on people who committed crimes other than entering the country illegally.

While Biden has proposed a comprehensive immigration reform plan to Congress, there has been little movement to advance it. In July, a federal judge ruled that the Deferred Action for Childhood Arrivals (DACA) program, which shielded young people brought illegally to the U.S. as children from deportation, is unlawful, and disallowed new applications to the program. The case is likely to be heard by the Supreme Court, but in the meantime, the defeat in the courts ramps up pressure on Biden and Congress to achieve a legislative fix for Dreamers.

“Only Congress can ensure a permanent solution by granting a path to citizenship for Dreamers that will provide the certainty and stability that these young people need and deserve,” Biden said in a statement Saturday. “It is my fervent hope that through reconciliation or other means, Congress will finally provide security to all Dreamers, who have lived too long in fear.”

One policy area proving elusive for Biden is police reform and gun control, as legislation on the issues have stalled in Congress.

The Biden White House has frequently highlighted its support for the George Floyd Justice in Policing Act, and called for it to be passed by the first anniversary of Floyd’s death in May. While the deadline was missed, they have encouraged bipartisan negotiations on Capitol Hill that have yielded little beyond a “framework” and discussions continue.

The administration also decided to forgo Biden’s campaign promise to create a commission within his first 100 days to study the issue of policing, with senior adviser Susan Rice saying the administration decided it would not be the “most effective way” to deliver on its top priority of getting the Floyd bill passed “based on close, respectful consultation with partners in the civil rights community.”

The president has not seen gun control legislation come to his desk from Capitol Hill, even after the House passed a measure that would address loopholes in the background check system. But Biden has taken unilateral action on the issue after several mass shootings during his short tenure in office.

He took additional action in June, allowing communities to spend some of the funding they received as part of his $1.9 trillion COVID-19 relief bill funding to combat gun crime, such as investing in summer jobs programs for youths; hiring more police officers and court personnel; spending on gun-violence enforcement; and paying for more nurses, counselors and social workers.

Other measures include establishing a “zero tolerance” policy for gun dealers who break the law; embedding federal law enforcement officials with local police departments; and hiring more formerly incarcerated people for jobs in the federal government, according to the White House.

Even with his presidential actions, Biden is limited in what he can accomplish on his own, and has fallen short of some of his biggest campaign pledges on the issue, like stopping the importation of assault weapons, and creating a national buyback program for the U.S.