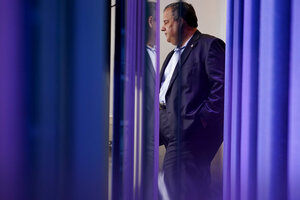 WASHINGTON (AP) — Former New Jersey Gov. Chris Christie said Thursday that he was wrong not to wear a mask at the White House, after he and President Donald Trump both came down with the coronavirus.

Christie, in a statement, said he has recovered from COVID-19 after a week-long stay in a hospital’s intensive care unit. He called on all political leaders to advocate for face-coverings, as the practice has become increasingly politicized even as the pandemic has killed more than 217,000 Americans.

“I believed that when I entered the White House grounds, that I had entered a safe zone, due to the testing that and I and many others underwent every day,” Christie said. “I was wrong.”

Christie, who was at the White House for the announcement of Judge Amy Coney Barrett as the president’s nominee to the Supreme Court and to a participate in several rounds of Trump’s debate prep, seemingly chided the president’s attitude toward the disease.

Trump has since called his illness as “a blessing from god,” arguing it exposed him to promising therapeutics. He has also been an inconsistent advocate for mask wearing, holding large rallies of thousands of people where many of supporters do not follow public health guidance to cover their face to prevent the spread of the virus.

“Every public official, regardless of party or position, should advocate for every American to wear a mask in public, appropriately socially distance and to wash your hands frequently every day,” Christie said.