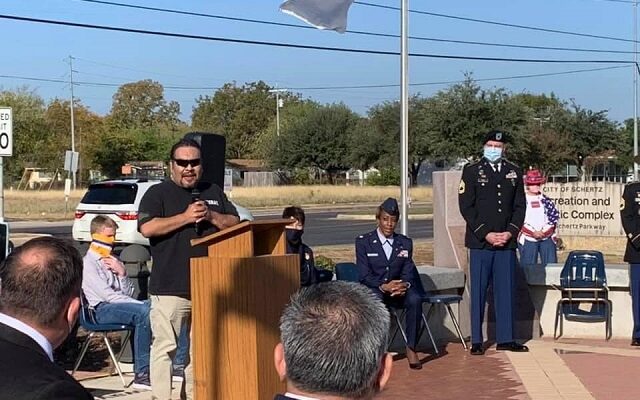 SAN ANTONIO (KTSA News) – When Sammy Villela says,”I’m glad to be here,” he really means it.  The Army veteran is glad to be alive after nearly taking his life a few years ago.

“I was dealing with some deep, dark, PTSD (post-traumatic stress disorder) issues,” he told the crowd at a Veterans Day ceremony in Schertz. “A few years ago, I almost took my own life. I was that close to pulling the trigger on a pistol to take my own life.”

Villela calls himself “Tio Sam.” Tio is the Spanish word for uncle. Villela  served with the 101st Airborne Division and the 7th Special Forces Group before spending several years as a Special Agent for the Department of Defense. During his time in the Army, he served in Afghanistan and Iraq.

He didn’t tell his wife he had been diagnosed with PTSD, so she didn’t understand the anger outbursts, the rage, and the increase in alcohol consumption.

“The nightmares, oh man.  Just jumping out of bed in the middle of the night, not knowing where you are and thinking you’re back in that hell that you endured,” said Villela. “This is what veterans are dealing with today.”

He said the military is getting better at understanding and providing treatment for PTSD, but for many, the help came too late.   Villela serves on the board of Project Healing Heroes, which helps combat veterans, service members, first responders and their families resolve trauma.  Wednesday, he urged people at Schertz Memorial Plaza to “love a veteran.”

Villela says one individual can make a big difference in a veteran’s life.