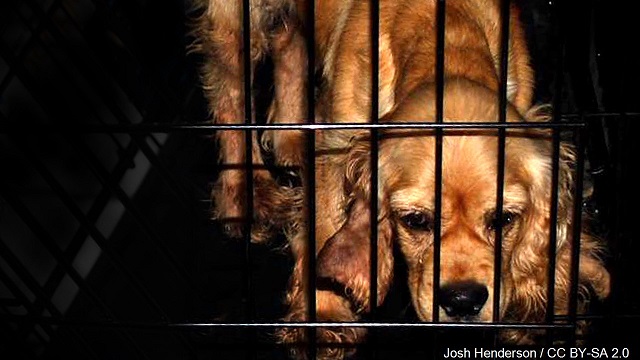 SAN ANTONIO (KTSA News) – Starting next year, pet stores within the city limits of San Antonio Antonio will not be allowed to sell dogs from commercial breeding facilities.   They can, however, work with local shelters and certified animal rescue organizations.

“Puppy mills and unscrupulous breeders are all about maximizing the bottom line—bigger and bigger litters with little to no concern for their health,” says Lefgren. “This innovative approach puts some much-needed transparency into the process for prospective pet owners while also ensuring animals are being treated humanely.”

The owners of Petland argued that they deal only with responsible commercial breeders who treat their animals humanely.  Laura Zamora, a manager at Petland, says she’s an animal rights activist who abhors puppy mills, but she told the council that this ordinance won’t do anything to solve that problem.

“This ban will not shine light on irresponsible breeders,” said Zamora.  “It will only drive them further underground where there is no regulation, no enforcement and our animals will suffer.”

Katie Jarl-Coyle, Regional Director of State Affairs at the Humane Society of the  United States, says the national organization has seen a number of complaints about area pet store operations.

“We applaud the San Antonio City Council for passing this important animal welfare and consumer protection measure,” said Jarl-Coyle. “This ordinance ensures puppy mill puppies will no longer be trucked into our city to be sold to unsuspecting consumers at local pet stores.”

The ordinance will go into effect January 1, 2021. It does not impact a person’s ability to obtain the pet of their choice from an animal shelter, rescue group or even a breeder who sells directly to the public.

The ordinance was approved 9-1 vote.  Councilwoman Shirley Gonzales was the only member to oppose it. Councilwoman Adriana Rocha-Garcia was not present for the vote.

Gonzales explained that she doesn’t condone puppy mills, but she doesn’t think the ordinance addresses the issue of  overpopulation and dogs roaming the streets in some neighborhoods.  She said the real problem is irresponsible pet ownership, and the ordinance doesn’t address that.

“I think this ordinance is very misguided,” Gonzales said. “These particular companies are getting scapegoated because of other problems that we have internally in our city.”

The subject of racism came up in the discussion before the  vote. Paula Sardinas, who’s Black, told the council about obstacles they faced when they tried to adopt from an animal rescue organization.

“We have presented tremendous information to you here  this morning that there is a documented case of structural and systemic racism in the pet rescue industry,” said Sardinas . “When someone that looks like me and my family, when we go to a rescue, we have to answer the coded questions.”

“To suggest that our animal adoption operations prefer one race over another really slanders the compassionate and hard- working men and women who work around the clock to find these animals their forever homes ,” said Pelaez. “I think that that kind of cynical sophistry has no place in a debate like this.”

The  council also approved a number of policy changes to the existing Chapter 5 animal ordinance including:

Lefgren clarified that the ordinance doesn’t prohibit the feeding of feral cats. He said residents can feed cats, as long as they don’t take a large amount of food and  dump it at a place where it could attract wildlife and create a nuisance.