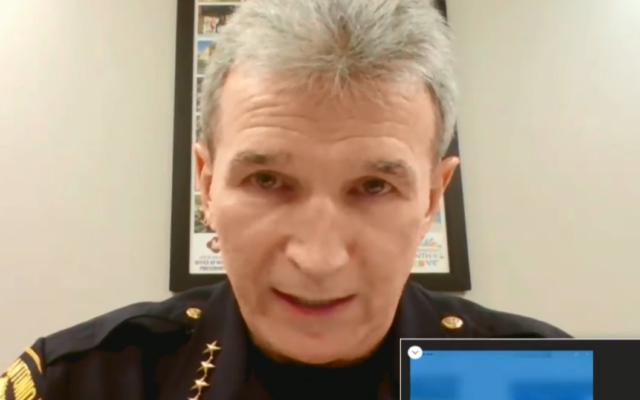 Police Chief William McManus says chokeholds are allowed only as a last resort when all other de-escalation tactics have failed.

“If your life is in danger as an officer or someone else’s life is in danger and that’s the means that you have available, then that’s when an LVNR (Lateral Vascular Neck Restraint) would be permitted,” McManus told the committee Tuesday.

Councilwoman Jada Andrews-Sullivan is pushing for a total ban “because we need to do better with de-escalation so that we do not get to another hashtag.”

Use-of-force policies are under review, not only in San Antonio, but across the country after the death of George Floyd.  He died after a Minneapolis police officer put his knee on Floyd’s neck for more than 8 minutes.  Bans on chokeholds and no-knock warrants are on a list of  “8 Can’t Wait” recommendations– part of the national movement called Campaign Zero, which is aimed at ending police violence.

City Attorney Andy Segovia discussed a possible situation where de-escalation tactics have worked, but as police are about to handcuff the suspect, a struggle ensues and the suspect tries to take the officer’s gun.

“We do not want to remove any maneuver, whether that be chokeholds, biting, gouging, etc., that would give him the upper hand in a death struggle with somebody who’s trying to take his weapon,” said Segovia.

“Violent crime is on the rise here in San Antonio and I’m not willing to do that to our officers who are out on the street, protecting us on a day-to-day basis,” said Perry.  “It’s like sending in an officer with his hands handcuffed.”

The chief said there have been 28 complaints filed concerning the use of chokeholds and all have been overturned by a board comprised of police and civilians.

Councilmembers Rebecca Viagran and Ana Sandoval raised questions about whether the 28 complaints included multiple accusations against any one officer.  The chief said he would provide that information before the full council meets to discuss the issue.

Earlier this summer, an officer was fired for placing his knee on the neck of a suspect who was handcuffed.  Michael Brewer is appealing his termination.

McManus says he banned  no-knock search warrants in June, but there is an exception for arrest warrants “unless  exigent circumstances pose a serious threat to the safety of the officer or members of the public.”  He said officers would be allowed to enter without knocking  if they learned that someone intended to injure people inside “or maybe they set the place on fire, then we would make entry without knocking to protect life inside the premises.”

The Public Safety Committee sent the proposed bans on no-knock warrants and chokeholds to a council B session for further discussion.  Perry was the only committee member to vote against advancing the proposals.