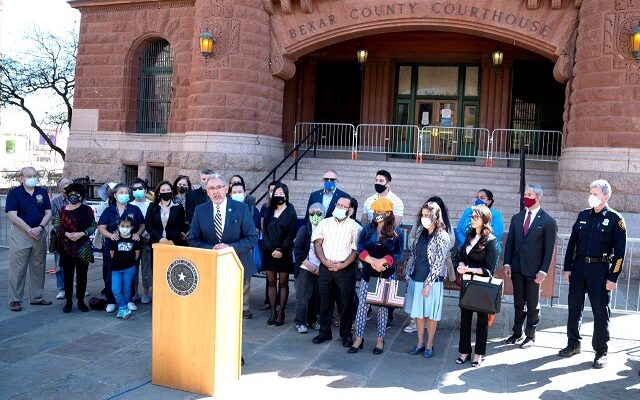 He called a news conference Thursday afternoon on the steps of the Bexar County Courthouse to show support for the local Asian-American community  following the vandalism of a Northwest Side ramen restaurant last weekend.  Someone painted anti-Asian messages on the windows and doors of the Noodle Tree Restaurant on UTSA Boulevard at Roadrunner Way last weekend.

McManus said officers are trying to determine who’s responsible for the vandalism.

Christina Lew, president of the San Antonio Lodge, Chinese -American Citizens Alliance, joined them on the steps of the Bexar County Courthouse.

“A hate crime against Asians is an act of hate against a fellow human being, whether it be mocking our accent and shouting slurs at us, or telling us to go back to our country,” said Lew.

She’s heartened by the outpour of community support and encouragement for Noodle Tree owner Mike Nguyen.

“Seeing pictures of people coming together to clean the racist graffiti at a local Asian-owned business and leaving messages of hope and encouragement further proves that we live in a great city,” said Lew.

Mayor Ron Nirenberg said the only way to drive out hate is through love and compassion.

“Whenever acts of hate occur in this city, neighbors stand up in solidarity to support one another,” said Nirenberg.

The Noodle Tree is in City Councilman Manny Pelaez’s district.

“All of us have come out here to say, ‘no, not in my city.’ This is not what we stand for.  San Antonio is not a home for bigots,” said Pelaez.

The Noodle Tree’s dining area was closed Thursday.  Nguyen said because of threats against him and the restaurant, he wouldn’t open the dining area until they can have police outside the restaurant.  What they lost in dine-in sales, but made up for with their online business. A “Sold  Out” sign was posted on the door Thursday afternoon and an employee explained that they had so many take-out orders, they ran out of food.   He said the dining area was scheduled to reopen Friday.

Nguyen says he started getting threats after going on CNN last week and criticizing Gov. Greg Abbott for lifting the mask mandate.  Nguyen, who’s battling cancer, is continuing to require face coverings inside his restaurant.

Gone is the graffiti outside his business, and in its place are dozens of paper hearts with supportive messages.