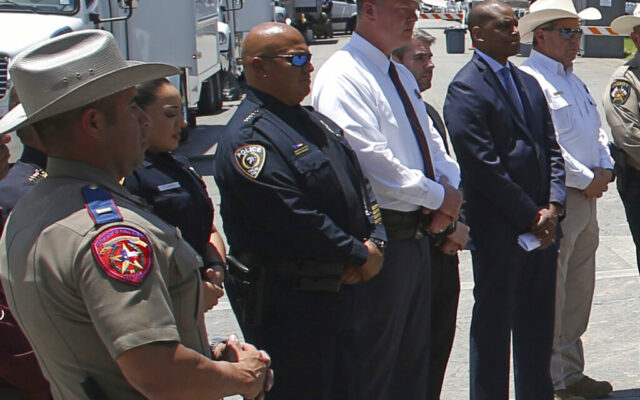 SAN ANTONIO (KTSA News) — The Chief of the Uvalde Consolidated Independent School District Police Department could soon be out of a job.

According to a CNN report, Pete Arredondo, who has been under intense scrutiny since the May 24th massacre at Robb Elementary School, could be terminated this weekend.

The report indicates that the Uvalde CISD school board will meet Saturday and vote on removing Arredondo from his position.

Arredondo has claimed that he didn’t consider himself the incident commander and that he was just a responding police officer that day.

He was placed on administrative leave last month but the public backlash against him has intensified after video from the school the day of the massacre was released earlier this month.

It showed law enforcement standing in the hallway for more than an hour, with no direction on how to stop the shooter who killed 19 students and 2 teachers. Bodycam video showed Arredondo pleading with the shooter to surrender.

The 19 year old gunman was eventually shot and killed by a Border Patrol agent.

Arredondo was also elected to Uvalde City Council recently, but resigned from that position July 2.

During a special meeting of the school board Monday, a number of community members demanded the board fire the chief by Tuesday.

But in cases where a public official is removed from office due to public outcry, there are often legal procedures before any action can take place. Sources tell CNN city officials have been discussing ways to remove Arredondo from his position since Monday’s meeting.

Arredondo has been the school district’s police chief since 2020.

The school board is expected to meet and vote on Arredondo’s future this Saturday.