Coast Guard seizes $1.4 billion worth of cocaine and marijuana 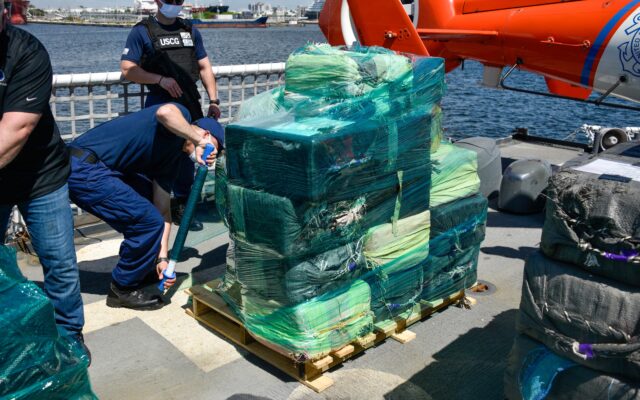 The U.S. Coast Guard announced Thursday that it was offloading a record-shattering amount of cocaine and marijuana at Port Everglades in Fort Lauderdale, Florida. The illegal narcotics — worth more than $1.4 billion — was “the largest offload in Coast Guard history,” according to a press release.

“Today’s offload is a result of our combined efforts of our inter-agency partners and a dedicated international coalition,” said Vice Admiral Steven Poulin, commander Atlantic area.

Crew members of the U.S. Coast Guard Cutter James offloaded approximately 59,700 pounds of cocaine and approximately 1,430 pounds of marijuana. The Coast Guard said there were 27 incidents in which suspected drug smuggling vessels were stopped by various American, Dutch and Canadian ships in international waters of the eastern Pacific Ocean and Caribbean Sea.

“Every bale of cocaine on this flight deck that doesn’t make it to our shores represents lives saved in New York City, Philly, Chicago, Los Angeles or any town in the U.S. that’s dealing with pandemic levels of drug overdoses this year,” Captain Todd Vance, a commanding officer on the Cutter James, said at a Thursday press conference.

#BREAKING @USCG Cutter James, @RoyalCanNavy Shawinigan crews offloaded approximately 59,700 lbs of cocaine and 1,430 pounds of marijuana worth more than $1.4 billion, Thursday, at @PortEverglades, which is the largest offload in #CoastGuard history. More to come. pic.twitter.com/k7KuDBqkTM

Images shared by the Coast Guard show the enormity of the drugs seized and those involved in the operation.

The press release said the Coast Guard will work with U.S. Attorneys offices across various districts to bring justice to those responsible for the illegal shipments.

In July, authorities in Southern California seized more than 16 tons of marijuana worth an estimated $1.19 billion, according to the Los Angeles County Sheriff’s Department at the time. The 10-day sting was the largest eradication of illegal marijuana cultivations in the history of the department.

In 2019, more than $1 billion worth of cocaine was seized at the Philadelphia Port, according to the U.S. Attorney’s Office. They said the drug bust netted approximately 16.5 tons of the narcotic from a cargo ship docked at the Packer Marine Terminal. It was at the time the largest cocaine bust in history in the Eastern District of Pennsylvania.