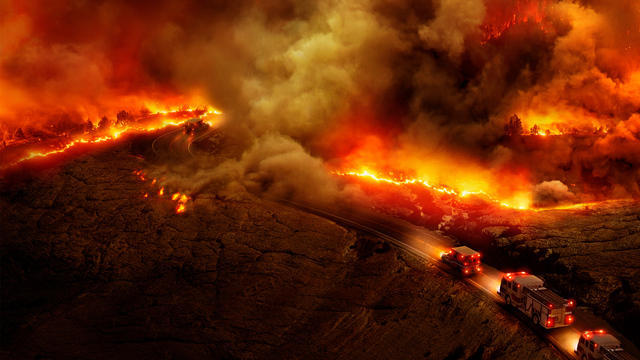 ▶ Watch Video: Colorado wildfire forces urgent evacuations
Mandatory evacuation orders have been issued for some Colorado residents and businesses as firefighters respond to the Kruger Rock Fire, which ignited Tuesday morning in Estes Park. Officials believe the 133-acre flame was ignited by an issue with power lines, CBS Denver reported.

In a series of emergency messages, the Larimer County Sheriff’s Office warned residents in the area that the fire poses “immediate and imminent danger.”

“Evacuate the area immediately and as quickly as possible,” the sheriff’s office said. “Do not delay leaving to gather belongings or make efforts to protect your home or business. Evacuating immediately not only supports your safety but also allows emergency crews better access to the area.”

The fast-spreading fire is just 90 minutes away from Denver and is located at the eastern entrance to Rocky Mountain National Park. The flame was reported just before 7 a.m. local time. The flames were 15% contained as of Tuesday evening.

The sheriff’s office said structures in the area are threatened, but no damage has been reported as of Tuesday morning. Larimer County Sheriff Justin Smith told CBS Denver there is concern the flames will reach U.S. Highway 36, which has since been closed from the eastern part of Estes Park to the western edge of Lyons.

Evacuation sites for animals and residents have been established by the county throughout affected areas.

The National Weather Service issued a red flag warning for the Front Range in Colorado from 10 a.m. until 6 p.m. local time on Tuesday, meaning that critical fire weather conditions are either currently happening or that they will shortly.

Wind gusts in the area are forecast to reach up to 45 miles per hour with relative humidity as low as 10 percent, according to the National Weather Service. It warned of possible rapid-fire growth.

On Tuesday evening, a single-engine tanker plane helping to battle the blaze crashed in the area.

“We are sad to report that the pilot and only occupant of the aircraft did not survive,” the Larimer County Sheriff’s Office later confirmed..

More than 49,000 wildfires have scorched over 6.5 million acres across the western U.S. since the start of 2021, according to the National Interagency Fire Center.

The severity, overall size and the number of wildfires in recent decades has increased across the country due to factors including extended drought and earlier snow melts, the U.S. Department of Agriculture reports. Those factors have been linked to climate change.