Columbus statue to be removed for repairs 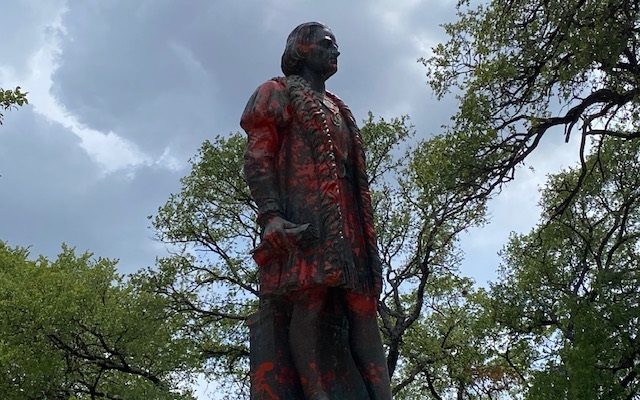 SAN ANTONIO (KTSA News) – The Christopher Columbus statue is scheduled to be removed from  downtown San Antonio within the next few days for cleaning and repairs as the city council considers a proposal that would keep it from being reinstalled at the current location. Vandals last week splashed red paint on the statue that overlooks Columbus Park on West Martin near IH 10/IH 35.

Councilman Roberto Trevino presented a plan Tuesday to the city council’s governance committee that would return the statue to the Christopher Columbus  Italian Society of San Antonio and change the name of Columbus Park to Piazza Italia. Trevino and the Society, which donated the statue to San Antonio in 1957, have been working on the proposal, along with  Antonio Diaz with the Texas Indigenous Council.

Diaz has been leading the fight to remove the statue, which he says represents racism, oppression and slavery.

The Governance Committee chaired by Mayor Ron  Nirenberg voted unanimously to send the plan to the full city council in August. The council will not meet as a full body in July to allow members to  attend work sessions on the proposed budget.

Councilwoman Ana Sandoval expressed concern about the safety of people at Columbus Park. She noted that armed civilians were at the park while people were protesting the Columbus statue and demanding that it be removed.

She commended Trevino and the Italian Society for coming up with a plan for the “respectful removal” of the statue.