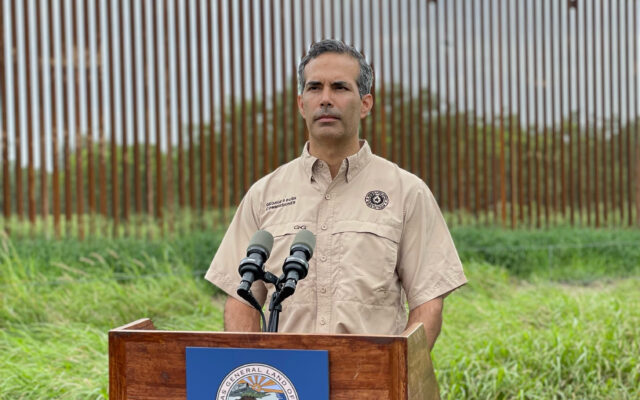 Photo courtesy of the Texas General Land Office / Texas Land Commissioner George P. Bush announced he is suing the Biden Administration over a refusal to complete the border wall

SAN ANTONIO (KTSA News) — Texas Land Commissioner George P. Bush he is pursuing a lawsuit against the Biden Administration over efforts to prevent the U.S.-Mexico border wall from being constructed.

The lawsuit against President Joe Biden and Department of Homeland Security Alejandro Mayorkas alleges that border wall construction is being illegally blocked through a refusal to use federally appropriated funds.

“For four years, Congress allocated more than $5 billion to construct fencing and walls around the Southern border,” Bush said Wednesday. “Each year, that legislation was signed into law by President Donald Trump. Now, four years after the first funding was signed into law, President Biden has announced that he will simply no longer follow the law and illegally halted all construction to build the wall. This is wrong. This is illegal. And this will not hold up in court.”

The lawsuit is part of the Texas Defense Task Force in February that acts as a watchdog to identify federal overreach related to the Texas oil and gas economy.

In June, Bush announced the General Land Office would partner with state and local officials to expedite the completion of the border wall through emergency authorization to use state lands following the announcement by Texas Governor Greg Abbott that Texas would oversee completion of construction of the wall.

A $250 million downpayment on border wall construction was allocated in June through an executive order and Abbott said the state will formally request land acquired by the federal government be returned to landowners to be utilized for the state-led project.

Bush announced last month that he is seeking to unseat Texas Attorney General Ken Paxton in the 2022 election.