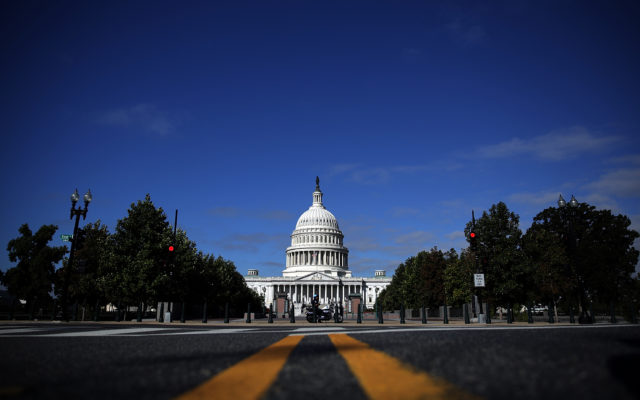 WASHINGTON, DC - SEPTEMBER 29: The United States Capitol building is seen as Congress remains gridlocked over legislation to continue funding the federal government September 29, 2013 in Washington, DC. The House of Representatives passed a continuing resolution with language to defund U.S. President Barack Obama's national health care plan yesterday, but Senate Majority Leader Harry Reid has indicated the U.S. Senate will not consider the legislation as passed by the House. (Photo by Win McNamee/Getty Images)
▶ Watch Video: Senator Josh Hawley on working with Bernie Sanders on COVID-19 relief
Washington — Congressional leaders are nearing a deal on a coronavirus relief package which would include another round of direct payments to Americans, just days ahead of a deadline to extend government funding and with critical relief programs set to expire at the end of the month.

The emerging deal would likely cost around $900 billion, a source familiar with the negotiations told CBS News, with contentious provisions on funding for state and local governments and liability protections for businesses set aside.

The deal would include two popular provisions that were part of the CARES Act passed in the spring: direct checks to Americans with a salary under a certain threshold, and a weekly benefit on top of unemployment insurance. It’s unclear how much money would be included in the checks, or what the final figure for the unemployment benefit would be.

The framework being negotiated by these leaders is largely based on a $748 billion proposal introduced by a bipartisan, bicameral group of lawmakers. The proposal included an additional $300 per week on top of unemployment insurance, significantly lower than the $600 per week established by the CARES Act, which expired at the end of July.

This group had also introduced a $160 billion proposal including funding for state and local governments, which is critical for Democrats, and liability shields for businesses and institutions, a priority for McConnell. But the four congressional leaders now appear likely to agree to a second round of stimulus checks and other aid without addressing state and local funding and liability protections. The source familiar with the negotiations said aid for state and local governments would be available through “other avenues” in a final bill.

McConnell struck an optimistic tone that a deal could be reached in a speech on the Senate floor Wednesday morning.

“We made major headway into hammering out a targeted pandemic relief package that would be able to pass both chambers with bipartisan majorities,” the Republican leader said. “We committed to continuing these urgent discussions until we have an agreement. And we agreed we will not leave town until we’ve made law.”

Democratic Senator Joe Manchin, one of the chief negotiators of the bipartisan bill, told CBS News on Wednesday that he expected the direct checks to amount to $600 in order to keep the price tag of the bill at roughly $900 billion. Manchin also noted that the unemployment benefits would only last for 16 weeks, and said that there would need to be continued negotiations when Congress reconvened in January.

“They can come back in January when Joe Biden becomes president, take a look at the emergency needs that we still have. This is an emergency bill, it’s not an end all, be all,” Manchin said.

The bill is expected to be attached to an omnibus spending bill, which must pass before government funding expires this Friday. The legislation must also be signed by President Trump before December 18 at midnight in order to avert a shutdown.