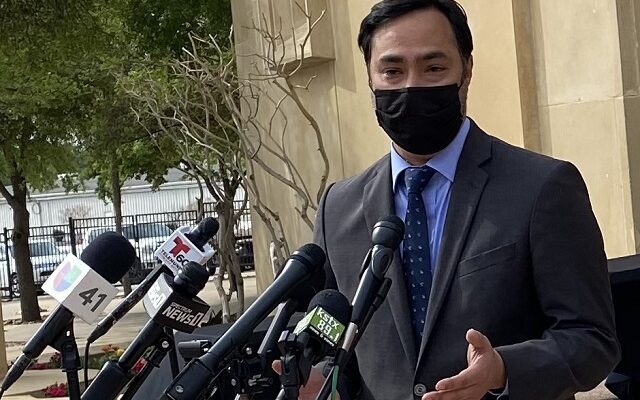 “We wanted to come to make sure that the kids are being treated humanely, that they’re being treated with respect and with dignity,” said Castro.  “We hope and we expect that this will be a quick and efficient stop on the way to their family sponsors while they seek asylum in the United States.

While noting it’s not the ideal situation, Castro said the shelter is much better than the U.S. Customs and Border Protection detention facilities where images show children sleeping right next to each other on the floor with mylar blankets in crowded enclosures.

“I don’t believe that people should be going to CBP processing centers anymore.  I think the federal government has to come up with another solution,” Castro said.

Bexar County Judge Nelson Wolff said the boys at the Coliseum Expo Hall are so grateful for the clothing, food and shelter they’ve been provided that they “burst into applause” to show their gratitude when the group arrived to tour the accommodations  Tuesday.

“This may not be the Marriott Resort, but it’s clean, it’s air-conditioned, it’s climate controlled, and it’s regulated in a very good way that we separate COVID patients,” said Wolff.

Most of the asylum seekers are from Central America.

“They came over a thousand miles from the southern border of Mexico to make their way to the United States and to seek asylum.  These are good, good kids,” said Wolff.

County Commissioner Rebeca Clay-Flores says it’s not about politics, it’s about the children.

“It’s a humanitarian issue, it’s not a political issue.  It’s about supporting our children,” she said.

The boys are waiting to be placed with families or sponsors, which can take 5 to 9 days.

“These are kids and they so desperately want a safe place to stay and to be considered Americans,” said Mayor Ron Nirenberg.