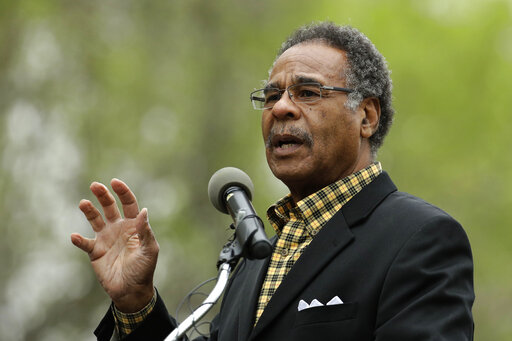 Rep. Emanuel Cleaver, D-Mo., addresses people attending a sign unveiling ceremony for the Quindaro Townsite National Commemorative Site Tuesday, April, 23, 2019, in Kansas City, Kan. The site contains the ruins of the town of Quindaro, which was founded in the 1850s as a free state port of entry and a stop on the underground railroad for slaves to escape from Missouri located across the Missouri River from the town. (AP Photo/Charlie Riedel)

KANSAS CITY, Mo. (AP) – U.S. Rep. Emanuel Cleaver said he was caught off guard by the negative response after he ended his opening prayer on the first day of the new Congress by saying, “Amen and A-woman.”

Cleaver, a United Methodist minister and former mayor of Kansas City, Missouri, is in his ninth term in Congress. He told the Kansas City Star his “A-woman” reference on Sunday was intended to recognize the record number of women serving in the new Congress.

But it spurred a torrent of criticism from conservatives who accused Cleaver of misunderstanding the meaning of “amen,” a Hebrew word that means “so be it.”

Cleaver said it was a pun intended as a tribute to his female colleagues and to Rear Adm. Margaret Grun Kibben, the new House chaplain and first woman to hold the role.

There are 144 women serving in the House and Senate. The previous high was 129.