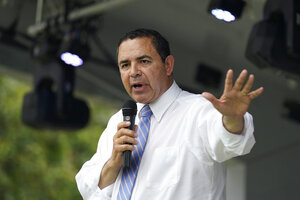 FILE - U.S. Rep. Henry Cuellar, D-Laredo, speaks during a campaign event, Wednesday, May 4, 2022, in San Antonio. Cuellar, a 17-year incumbent and one of the last anti-abortion Democrats in Congress, is in his toughest reelection campaign, facing a May 24 primary runoff against progressive Jessica Cisneros. (AP Photo/Eric Gay)

Cuellar is a pro-life centrist who has criticized President Joe Biden’s border policy. He’s been facing challenges from within his own party in the last two election cycles by Jessica Cisneros.

He barely got through a primary runoff against Cisneros this year, edging his challenger by fewer than 300 votes.

Cuellar has been serving as Congressman for District 28 since 2005.