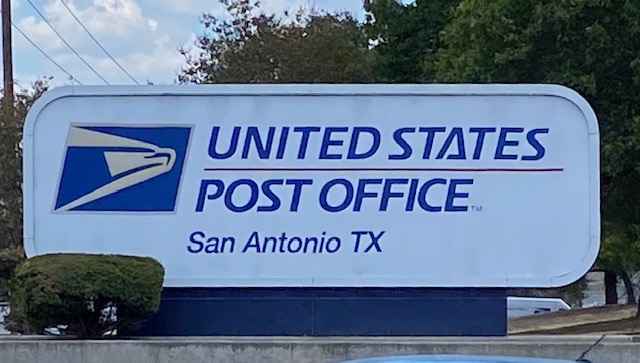 “That mail had been sitting there for weeks and weeks”said Carlos Barrios with American Postal Workers Union. “I’ve been addressing  this issue to various supervisors here about the delay about this mail.”

Before Castro arrived at the facility on Perrin Beitel Road Wednesday, Barrios was told the backlogged mail with deliverability issues was being sent to Austin where they have machines that can sort it out.  Barrios said he told Castro’s aide about it Wednesday evening.

“I told the aide they played him (Castro) like a fool.  This was a tour that we give elementary kids,” Barrios said.

“Folks have said that their business packages are delayed or they tried to pay bills and those checks weren’t received, and so now they’re having to pay late fees,” said Castro.

The U.S. Representative for the 20th Congressional District says he’s also heard complaints about medicines being delayed, including his own mother, who has diabetes.

Castro, a Democrat, blames the delays on recent cost-cutting measures, which included the removal of 6 mail-sorting machines in San Antonio.  He believes those actions were politically motivated with the intention of delaying mail-in ballots.  President Trump claims that mail-in ballots increase the potential for voter fraud.

“The Postmaster General was a mega donor to the President, and the President has been very hostile towards the Postal Service and toward mail-in voting,” Castro told reporters outside the mail facility on Perrin Beitel Road.

Following an outcry, Postmaster General Louis DeJoy reversed course this week and suspended planned changes until after the November Election. However, Castro said that the six mail-sorting machines that were recently scrapped remained offline when he toured the main post office in San Antonio Wednesday afternoon.

“We’re going to take this up with the Postmaster General because obviously, it’s not just an issue for San Antonio–it’s an issue for other parts of the country as well.

DeJoy is scheduled to testify before the Senate on Friday and the House of Representatives on Monday.