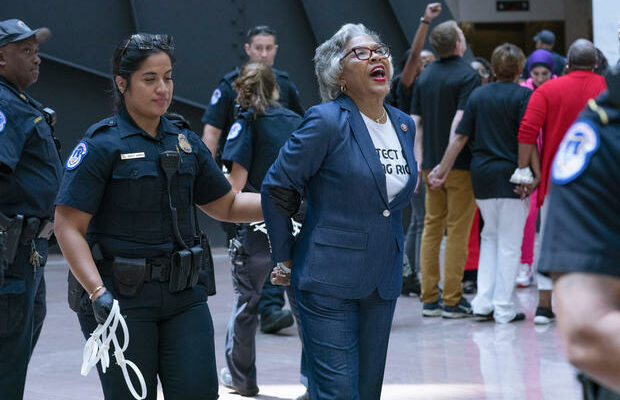 Rep. Joyce Beatty, D-Ohio is taken into custody by U.S. Capitol Police officers in the Hart Senate Office Building, after a demonstration supporting voting rights, July 15, 2021, in Washington. Jose Luis Magana / AP
Ohio Congresswoman Joyce Beatty, the chairwoman of the Congressional Black Caucus, was arrested on Thursday along with eight activists while protesting on Capitol Hill. Beatty was arrested by Capitol police after demonstrating for voting rights in the atrium of a Senate office building.
“You can arrest me. You can’t stop me. You can’t silence me,” Beatty wrote on Twitter after her arrest. Beatty and a group of around 20 protesters demonstrated in the hopes of putting pressure on senators to pass voting rights legislation.

The group entered the Hart Senate Office Building building singing spirituals, and chanted phrases related to protecting voting rights, such as “free the vote,” “end the filibuster,” and “fight for justice.” Capitol Police officers arrested Beatty and eight other protesters, binding their hands with zip ties.

According to a statement posted to Twitter by Capitol Police, the protesters were warned three times to stop before they were arrested for violating a D.C. law that bars “crowding, obstructing, or incommoding,” and disallows demonstrators to “resume engaging in a demonstration after being instructed by a law enforcement officer to cease engaging in a demonstration.” Buildings in the Capitol complex are still closed to the public, but members and staff are allowed to bring guests inside.

Beatty and the demonstrators were calling on the Senate to pass the For the People Act, a wide-ranging voting and elections reform bill that was blocked last month, and the John Lewis Voting Rights Advancement Act. Lawmakers are still crafting the latter bill, which restores a provision of the 1965 Voting Rights Act gutted by the Supreme Court, and the House is expected to vote on it in the fall.

However, prospects are grim in the Senate for the John Lewis Voting Rights Advancement Act, which is named for the late congressman and civil rights icon. Legislation requires 60 votes to advance in the Senate, and Democrats hold a 50-seat majority. Only one Republican, Senator Lisa Murkowski, supports the bill, meaning that it would fall far short of the 60-vote threshold if brought to the Senate floor.

Activists have called on Senate Democrats to eliminate the filibuster, which would allow legislation to advance with a simple majority. However, that rule change would require support from all Democratic senators, and at least two have reiterated their opposition to ending the practice.

Senator Joe Manchin, one of the most outspoken opponents of eliminating the filibuster, met on Thursday with a group of Texas House Democrats, who fled their state in an effort to block controversial bills restricting voting rights. The Texas legislators have been meeting with lawmakers in Washington to convince them to pass federal voting rights protections.

Manchin told reporters after the meeting that he and the Texas legislators were in “total agreement” about their goals, which is “basically to protect voting rights.”

Manchin argued that the universal Republican opposition to the For the People Act was because it was too broad, and said that he believed they would be willing to support a narrower voting bill.

“They’ve had a bill that’s 800 pages long, they’ve had everything thrown at them. Let’s get back to the basic rights of voting, protecting voting rights,” Manchin said.

However, it appears unlikely that the bill will garner any more particular support, particularly since Senate Minority Leader Mitch McConnell has come out in opposition to it.