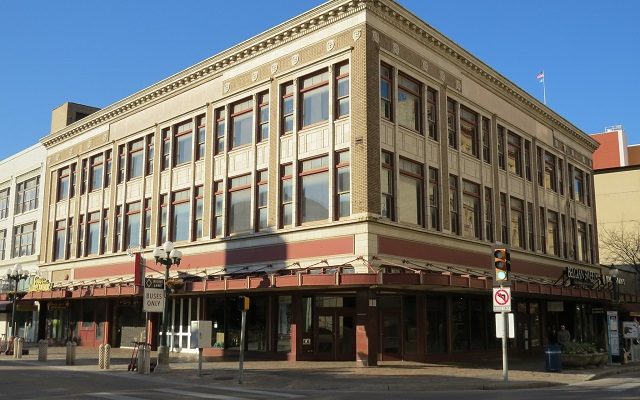 SAN ANTONIO (KTSA News) – Wearing purple shirts and carrying signs that read “Save the Woolworth Building,” members of the Conservation Society of San Antonio participated in the Martin Luther King March Monday in hopes of raising awareness and garnering support for their efforts to keep the historic structure at Alamo Plaza from being torn down as part of the Alamo Master Plan.

The 1921 Woolworth Building located on the site of the Alamo’s west wall was one of the first stores in the South to desegrate its lunch counter, along with six others in San Antonio.

“Rather than face a sit-in like we were seeing across the rest of the country, the civic and religious leaders in San Antonio got all the lunch counters to agree to integrate on March 16, 1960,  peacefully and voluntarily,” said Vince Michael, executive director of the Conservation Society of San Antonio.

The group is working with the NAACP and others who want the Woolworth Building to become part of the planned Alamo museum.

“We proposed a plan where you’d hollow out a portion of the inside so you could walk along where the western wall of the Alamo was and you can still interpret the lunch counter inside,” said Michael.

“Having those existing buildings and how those systems work within the framework of building a museum is difficult,” Treviño told KTSA News.

However, he said Woolworth’s lunch counter story will be told.

“We have an agreement with the Alamo museum to make sure that we tell the story of the Woolworth Building and how it played a critical role in the civil rights story of San Antonio,” Treviño said.

The councilman told KTSA News he’s working with Trinity University to create a civil rights institute and construct a replica of the 1960’s lunch counter inside the Kress Building on East Houston Street. Treviño says they’ll also use art projects and other projects to tell the story about all seven stores that desegrated their lunch counters in 1960. While the Conservation Society supports those efforts, members continue to advocate for saving the Woolworth Building. Rose Moran, 5th vice president of the Conservation Society, hopes the community will support their efforts.

“We’re always out there trying to save a building and trying to continue our history,” said Moran.

Treviño says the ultimate decision lies with the State of Texas.

“The biggest lesson we’ve learned about the Alamo is that we’ve got to get past our mythologies and get on to telling our complete history, factual history, objective truths,” Treviño said.