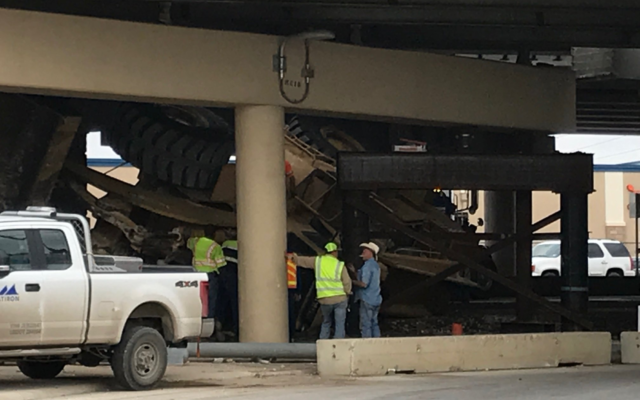 TxDOT has cleared the overturned vehicles and crews are now assessing the damage done to the overpass.

TxDOT says an 18-wheeler carrying the front loader overturned in the intersection of Loop 1604 and Pat Booker Road Wednesday afternoon.  That caused the front loader to strike the overpass support pillars underneath the highway.

Crews are still working to remove the front loader from the roadway.

TxDOT says crews are still trying to remove a front loader from the crash scene before it can assess the structural damage to the Loop 1604 overpass.

The department says the front loader does not belong to it nor its contractors.

SAN ANTONIO (KTSA News) — The City of Live Oak says traffic will be a nightmare on Pat Booker Road near Loop 1604 Wednesday afternoon because of a crash involving a large piece of construction equipment.

The city said the piece of equipment is under the bridge and it is working with TxDOT to get it out.

Live Oak police say it is best to just avoid the area for a long time.