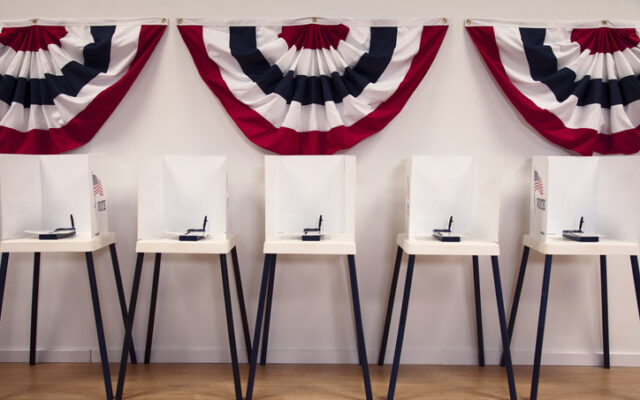 WASHINGTON (AP) — A fierce competition for control of Congress along with dozens of governors’ mansions and key election posts was unfolding Tuesday as polls began closing in several closely watched states along the East Coast.

In Georgia, Democratic Sen. Raphael Warnock and Republican challenger Herschel Walker were vying for a seat that could determine control of the Senate. GOP Gov. Brian Kemp and Democrat Stacey Abrams were meeting for a rematch of their marquee 2018 campaign. The candidates must win at least 50% of the vote to avoid a December runoff.

Meanwhile, in Virginia, Democratic Reps. Abigail Spanberger and Elaine Luria were fending off spirited Republican opponents. The results there could serve as early signals of where the U.S. House majority is heading as Republicans hope to reclaim suburban districts that shifted to Democrats during Donald Trump’s tumultuous presidency.

The outcome of races for House and Senate will determine the future of President Joe Biden’s agenda and serve as a referendum on his administration as the nation reels from record-high inflation and concerns over the direction of the country. Republican control of the House would likely trigger a round of investigations into Biden and his family, while a GOP Senate takeover would hobble Biden’s ability to make judicial appointments.

Democrats were facing historic headwinds. The party in power almost always suffers losses in the president’s first midterm elections, but Democrats had been hoping that anger from the Supreme Court’s decision to gut abortion rights might energize their voters to buck historical trends.

Even Biden, who planned to watch the evening’s election returns at the White House, said late Monday night that he thought his party would keep the Senate but “the House is tougher.” Asked how that would make governing, his assessment was stark: “More difficult.”

Republicans are betting that messaging focused on the economy, gas prices and crime will resonate with voters at a time of soaring inflation and rising violence.

AP VoteCast, a broad survey of the national electorate, showed that high inflation and concerns about the fragility of democracy were heavily influencing voters.

Half of voters said inflation factored significantly, with groceries, gasoline, housing, food and other costs that have shot up in the past year. Slightly fewer — 44% — said the future of democracy was their primary consideration.

Few major voting problems were reported around the country, though there were hiccups typical of most Election Days. Some tabulators were not working in a New Jersey county. In Philadelphia, where Democrats are counting on strong turnout, people complained about being turned away as they showed up in person to try to fix problems with their previously cast mail-in ballots.

In Maricopa County, Arizona, which encompasses Phoenix and is the state’s largest county, officials reported problems with vote-tabulation machines in about 20% of voting places. That fueled anger and skepticism about voting that has been growing among some Republicans since the state went narrowly for Biden in 2020.

Polls were still open in several states with high-profile races for Senate or governor, including Pennsylvania, Nevada, Wisconsin, Arizona and Michigan. Voters in many of these states were also choosing secretaries of state, roles that typically generate little attention but have come under growing scrutiny as GOP contenders who refused to accept the results of the 2020 campaign were running to control the management of future elections.

In the first national election since the Jan. 6 insurrection, the country’s democratic future is in question. Some who participated in or were in the vicinity of the attack are poised to win elected office Tuesday, including several running for House seats. Concerns about political violence are also on the rise less than two weeks after a suspect under the spell of conspiracy theories targeted House Speaker Nancy Pelosi’s San Francisco home and brutally beat her 82-year-old husband.

The 2022 elections are on track to cost a projected $16.7 billion at the state and federal level, making them the most expensive midterms ever, according to the nonpartisan campaign finance tracking organization OpenSecrets.

Republicans entered the final stretch of the campaign in a strong position to retake control of at least one chamber of Congress, giving them power to thwart Biden’s agenda for the remaining two years of his term. The GOP needed a net gain of just one seat to win the U.S. Senate and five to regain the U.S. House.

All House seats were up for grabs, as were 34 Senate seats — with cliffhangers especially likely in Pennsylvania, Georgia and Arizona. Thirty-six states are electing governors, with many of those races also poised to come down to the slimmest of margins.

In state capitals, Republicans were poised to lose two governorships in traditionally Democratic states: Maryland and Massachusetts. The GOP also faced unexpected headwinds in flipping the governor’s office in Kansas. Democrats, meanwhile, were nervous about their prospects in the governor’s race in Oregon, typically a liberal bastion.

If the GOP has an especially strong election, winning Democrat-held congressional seats in places like New Hampshire or Washington state, pressure could build for Biden to opt against reelection in 2024. Trump, meanwhile, may try to capitalize on GOP gains by formally launching another bid for the White House during a “very big announcement” in Florida next week.

The former president endorsed more than 300 candidates in the midterm cycle and said he personally voted for Republican Ron DeSantis, who is seeking his second term as Florida’s governor. That’s despite DeSantis being viewed as a potential leading GOP primary alternative to Trump should the governor jump into the 2024 White House race, as is widely expected.

“Well, I think if they win, I should get all the credit. And if they lose, I should not be blamed at all. But it will probably be just the opposite,” Trump said in an interview with NewsNation.

Biden’s lagging approval left many Democrats in competitive races reluctant to campaign with him. Only 43% of U.S. adults said they approved of how Biden is handling his job as president, according to an October poll by The Associated Press-NORC Center for Public Affairs Research. Just 25% said then that the country is headed in the right direction.

Still, Biden has for months urged voters to reject Republicans who have contributed to an extreme political environment.

That resonated with Kevin Tolbert, a 49-year-old who works in labor law and lives in Southfield, Michigan. “It is something that has to be protected and we protect that by voting and being out and supporting our country,” he said.

It could be days or even weeks before races — and potentially, control of Congress — are decided. Some states with mail voting, such as Michigan, saw an increase in ballot returns compared with the 2018 midterm. Those votes can take longer to count because, in many states, ballots must be postmarked by Tuesday but might not arrive at election offices until days later.