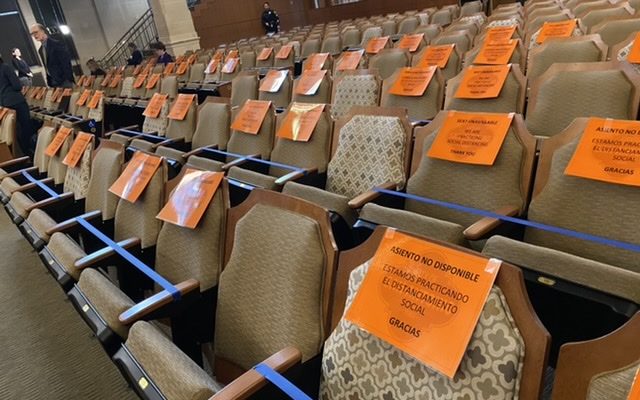 Pelaez then asked City Attorney Andy Segovia if the city council, by following Governor Abbott’s Public Health Emergency Orders, is in violation of the U.S. Constitution.

“Have we somehow, by agreeing to follow the governor’s orders, trampled on people’s rights to be free of unreasonable searches and seizures or their right to a jury or speedy trial? ” asked Pelaez.

Segovia’s reply to that and several other similar questions was “no.”

Councilman Clayton  Perry urged the mayor to change the name of the Public Health Emergency Orders.  He said as more businesses start to open, people are getting mixed messages with the ‘Stay Home, Work Safe’ orders.

“They can go out to restaurants, they can go shopping, they can go to businesses that are open, and we need to make that transition as well,” said Perry.  “I think we  need to change that title so that it is not creating that confusion.”

The City Attorney said the language in the governor’s orders, which is what the city is following, is part of the confusion. Segovia read the part that states,”Every person in Texas shall, except where necessary to provide or obtain covered services, minimize social gatherings or minimize in-person contact with people who are not in the same household.”   Covered services are those that  are being allowed to reopen.

Councilwoman Ana Sandoval said they should ask the governor to clarify the order.

“I would recommend asking the governor to clarify why he’s calling one thing “Open Texas,” and the order says stay home unless you’re going out for these particular issues,” said Sandoval.

When going over the recent orders issued by the mayor, Segovia pointed out that they are aligned with those issued by Gov. Greg Abbott this week.  He said businesses may require customers to allow additional measures, such as wearing a face covering.

“Consistent with, and allowed under the governor’s order, grocery stores, retail outlets, and restaurants may require, before a customer enters that establishment, for them to be wearing a face covering,” Segovia told the council.

He said he wanted to clarify that the City is following the State’s order.

Councilwoman Rebecca Viagran asked whether San Antonio could extend its orders if there’s a spike in COVID-19 cases, even if the Governor allows his orders to expire.

“In the event things go in a different direction, we’re going to have to have some serious discussions up here as well as with our sister cities in Texas and with the governor’s office about how we can control those infections, but so far so good,” the mayor said.