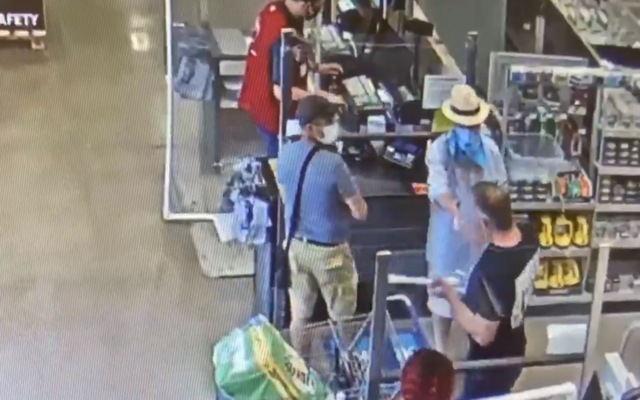 UPDATE:  SAN ANTONIO (KTSA News) – An arrest warrant has been issued as the search continues for the man who assaulted Bexar County Judge Nelson Wolff during a dispute over a mask requirement at a home improvement store in the city’s Northwest Side.

Wolff was in a checkout line at Lowe’s Home Improvement store on IH 10 near Callaghan Road Wednesday afternoon when he heard a customer arguing with a cashier who told him he should be wearing a face covering.

Bexar County Sheriff’s Deputy Johnny Garcia says  Wolff tried to give the man a business card and offered  to explain the importance of wearing a mask.  Businesses that provide services or goods in San Antonio and Bexar County have been ordered to require customers and employees to wear face coverings.

“At that point, you can see in the video, the subject slaps the judge’s hand, committing assault,” said Garcia.

The card fell to the floor, and Wolff picked it up.   Garcia told KTSA News that Wolff called Sheriff Javier Salazar and put his phone on speaker, allowing Salazar to hear what was going on.

“That altercation then spills outside to the parking lot and that individual was still berating the judge and using some expletives that you aren’t able to hear through the surveillance footage, but the sheriff maintained communication with the judge throughout this entire ordeal,” said Garcia.  He said it was clear that the irate man knew who he was arguing with.

At a COVID-19 briefing Wednesday evening, Wolff didn’t say much about the confrontation because it’s under investigation.  He told reporters he was not injured.

“We know there’s a lot of anger out there.  This guy may have just been having a bad day, and people are frustrated because they have to do things they would prefer not to do,” said the 79-year-old judge.

He said these individuals don’t understand that wearing a face covering is the best way to help keep from spreading the virus.

“Try to be understanding that the purpose of the mask is to save other people.  If you inadvertently pass it on to someone who has health issues, they could end up passing away,” the judge explained.

Wolff was able to get the license plate information from the man’s vehicle, and deputies have been able to identify him.

“We recommend that he turn himself in to us rather than us going out and seeking this individual,’ said Garcia.

SAN ANTONIO (KTSA News) – Bexar County Judge Nelson Wolff has been assaulted by a customer at a Northwest Side store after coming to the aid of a cashier in a dispute over the mask requirement. The man reportedly berated  the employee  at Lowe’s at Interstate 10 at Callaghan Road Wednesday afternoon.

Bexar County spokeswoman Monica Ramos told KTSA News that Wolff Intervened and tried to explain the reason for the face covering requirement, but the man kept arguing. The judge tried to hand him a card and asked the customer to call him, but the man smacked Wolff’s hand and knocked the card down.

Ramos says the man ran out of the store and Wolff followed him and got a license plate number.

Bexar County Sheriff’s deputies made the scene and the investigation continues.

Businesses that provide goods and services in San Antonio and Bexar County are ordered to require customers and employees to wear face coverings to help prevent the spread of COVID-19 as the numbers continue to surge.  The fine for businesses that don’t comply with the order is $1,000.