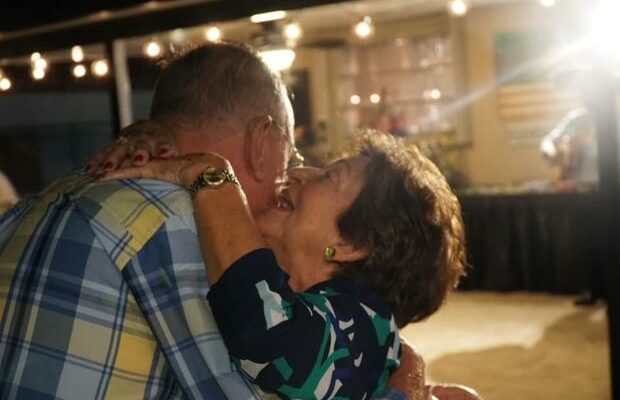 Sergio Lozano / The elderly couple, who would have celebrated their 59th anniversary in July, died together in the tower collapse.
After Sergio Lozano, 56, had dinner at his parents’ condo Wednesday night, they said their goodbyes and and he returned home to his own unit in the nearby Champlain Towers East in Surfside. His mom, Gladys Lozano, 79, had made his favorite dessert. His dad, Antonio Lozano, 83, was excited because his doctor said he could have his first drink in months after recovering from a surgery. This was the last time Lozano would see his parents.
Living by the beach had always been Antonio’s dream, and they had it at Champlain Towers South. When he started having health problems, Sergio, the youngest of two siblings, said he’d purchased an apartment right near his parents to keep an eye on them and make sure he could be there in the event of a medical emergency.

Once in a while he’d find comfort in sitting on his balcony and watching his mom cook dinner while his father watched the news on television. “It was very endearing having them so close,” he told CBS News.

Around 1:20 in the morning, Sergio Lozano was startled by a loud boom which he thought was a tornado, and he stepped out onto his balcony to bring the patio furniture inside. Instead of rain, he was hit by a staggering sight: billowing smoke and an expanse of night sky where his parents’ condo building once stood.

He remembered turning to his wife: “‘The building isn’t there!’ And she’s yelling, ‘What do you mean?’ ‘My parents’ apartment is not there, it’s gone!,’ and I just ran downstairs to Collins [Avenue],” Lozano said.

In the days since, family members of residents of the collapsed 12-story tower have staggered in and out of a family reunification center near the site trying to make sense of the tragedy. Family members gave DNA samples to help officials identify their relatives’ remains and gleaned scraps of information on rescue efforts.

Late Saturday night, Miami-Dade Police announced that the bodies of Gladys and Antonio Lozano had been recovered and identified. The couple would have celebrated their 59th wedding anniversary in July.

“This is a nightmare I can’t wake up from. I just had my last diner with them. Then just opening that door, and their building isn’t there,” Lozano told CBS News, breaking into tears.

Emergency crews continue searching for another 150 people who were still unaccounted for as of Tuesday morning. Eleven deaths have been confirmed so far.

More than 60 years ago, Antonio Lozano fled Fidel Castro’s communist regime in Cuba “with nothing but clothes on his back,” his son said, and moved to South Florida where he requested political asylum. Antonio, whose background in Cuba was in banking, worked three busboy jobs until he had enough money saved up to get his then-girlfriend Gladys into the United States — and marry her.

For years, the couple worked multiple jobs, seven days a week, from loading trucks to restaurant work, in order to provide for their American-born children, Sergio and Tony, while sharing a three-bedroom home with eight other people.

“My dad would take my mom to work at 3 o’clock in the morning, come back home, continue sleeping, take my brother to school at 8 a.m. and then go to work,” Lozano said. “They did it all for us.”

After Antonio was hired to become a bank clerk, he quickly climbed the ranks. Years later, through hard work and perseverance, he would become executive vice president at First National Bank of Miami, his son said.

During more than 20 years of condo living, the couple watched their two sons have children of their own, and they even got the chance to meet their first great-grandchild.

“Family and love are the greatest: Those are the most important values my parents left me with. And if you work hard, this country will provide you with everything you need,” Sergio Lozano said.

Sergio Lozano II, the couple’s grandson, described his abuela (grandmother) as like a “mom to all of us.”

“You taught us that love meant accepting everything about a person. To care and forgive when others wouldn’t. To always fight for family and never hold a grudge because it was not worth it,” he wrote in a eulogy to his grandparents posted on Facebook. “What you left behind is a foundation strong enough to hold us all up in moments like these.”

The son said that his parents’ biggest fear was that one of them would pass away before the other because they didn’t want to be without each other.

“My parents were yin and yang. ‘I can’t be without you,’ they would say,” Lozano recalls. “They always wanted to go together — and they did. That’s the only peace I have from this.”

Saturday, the Lozano family is laying Antonio and Gladys to rest together — something that they know dozens of other families still don’t have the ability to do.

“I’m grateful. It’s a love story. They couldn’t be without each other. Thank you, God, for letting them go together,” Lozano said. “I have their last memory and everything they taught me. I have closure.”