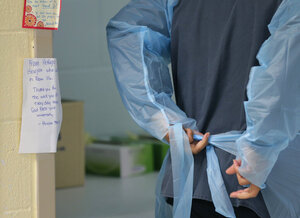 ▶ Watch Video: Understaffed hospitals battle COVID-19 surge
A traveling ICU nurse who has been treating COVID-19 patients said she often sees “regret” from her patients for not taking action to prevent contracting the virus. Lydia Mobley, who is a traveling nurse with Fastaff, which is deploying nurses across the country, told CBSN’s Lana Zak that “a common thing we hear is they didn’t think coronavirus was real, they didn’t think it was serious.”

The number of COVID-19 cases have been surging in November, with more than 624,000 active cases nationwide as of Friday, according to Johns Hopkins University. On Friday, more than 184,000 new cases were reported, a single-day record.

Mobley, who was serving in the Navy when the pandemic began, said she is “absolutely” scared for her family. She said that while it was difficult being an active-duty military member, “I didn’t imagine to come out and come home to this, that’s for sure.”

She said it is difficult to watch her fellow nurses, some of whom have been treating patients since the beginning of the pandemic, struggling to not breakdown. “The advice I’m given a lot is just survive,” Mobley said. “I think we all have our breakdowns.”

Mobley fought tears as she described sitting with a recent patient who died.

“You don’t want anybody to die alone, but there’s still more patients that need care,” Mobley said. “In their moments of passing, when all the measures are exhausted… you try to make them comfortable in their last moments. Because nobody deserves to die alone, but unfortunately families aren’t allowed to be at the bedside with them. That’s a really tough thing but it’s happening across the country.”

Mobley said that while she is lucky that her hospital has enough PPE, they are running out of COVID-19 body bags.

As the pandemic drags on, newer treatments are looking promising. While doctors have had success with convalescent plasma treatment, Mobley said supplies of convalescent plasma are running low. Mobley implored anyone who has had COVID-19 to donate plasma, and she also recommended blood donations. But she begged Americans to simply wear a mask.

“People are dying and it’s just very sad,” Mobley said. “And I hope more people will understand that something as simple as wearing a mask or not going to a party or whatever small steps can really make a difference.”