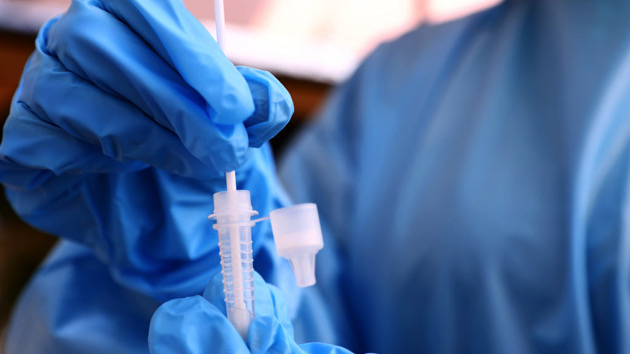 LOS ANGELES, CALIFORNIA - JULY 14: A registered nurse stirs a nasal swab in testing solution after administering a COVID-19 test at Sameday Testing on July 14, 2021 in Los Angeles, California. COVID-19 cases are on the rise in most states as the highly transmissible Delta variant has become the dominant strain in the United States. (Photo by Mario Tama/Getty Images)

San Mateo High School held the party on April 9 at the Asian Art Museum in San Francisco, about 18 miles away. Following the event, however, 90 out of the 600 students who attended tested positive for the virus.

“I was not very sick. I had a sore throat for a couple of days, like two, and then congestion,” junior Parker Del Balso, one of the 90 to contract COVID, told local affiliate ABC 7.

According to San Mateo Union High School District Superintendent Kevin Skelly, all of the cases were mild.

However, the cases were all reported to be either asymptomatic or mild, and no one required hospital care.

Experts said these outbreaks are a sign that BA.2 — a highly infectious subvariant of the original omicron variant and the predominant variant in the U.S — is not having a major impact on hospitalizations or deaths.

“These events, either among students or politicians, we are seeing signs of superspreader events,” said Dr. John Brownstein, an epidemiologist at Boston Children’s Hospital and an ABC News contributor. “But they’re not severe because of widespread vaccinations and people are overall protected from severe illness and death.”

Masks were optional at the event. However, according to guidance from the Department of Public Health in San Francisco, where the prom was held, masking is only required in high-risk settings such as health care facilities and homeless shelters.

In other settings, masking is only recommended based on individual risk tolerance, where there is high levels of community spread and if someone is at high risk of severe illness.

Despite the outbreak, school leaders and students said having the prom was worth it to provide a sense of normalcy during the pandemic.

“This has been a really hard year for kids, and we need to keep having as many activities as we can,” Skelly said.

Del Baso, the junior student, agreed, telling the local station, “Overall, I think it was worth it. It was a great, fun time.”

Skelly told ABC 7 that other schools in the district will be adding more mitigation measures to their proms so they don’t experience similar outbreaks.

“We’re going to be more careful about activities,” he said. “We’re going to test more students beforehand to make sure they’re not going into the dance COVID positive.”

Dr. Ali Mokdad, an epidemiologist with the University of Washington’s Institute for Health Metrics and Evaluation in Seattle, said the timing of the test before such events is very important.

“If you are doing a rapid PCR test and the event happens within two to three hours, that’s a good idea,” he told ABC News. “The timing and quality of the test will give you a good sense of security.”

He continued: “But if you get tested 48 hours before the event, you could catch the virus within that time and spread it.”