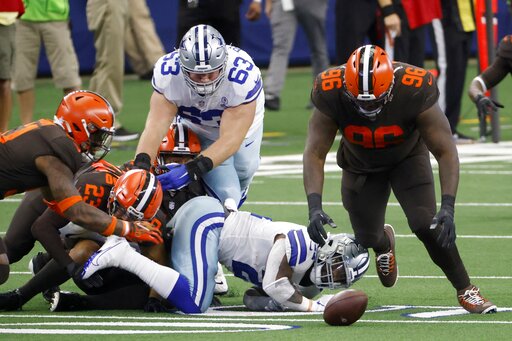 Dallas Cowboys running back Ezekiel Elliott, bottom center, fumbles the ball as Cleveland Browns' Andrew Sendejo (23), Vincent Taylor (96) and others race after the loose ball in the first half of an NFL football game in Arlington, Texas, Sunday, Oct. 4, 2020. The Browns recovered the ball. (AP Photo/Ron Jenkins)

By STEPHEN HAWKINS AP Sports Writer
ARLINGTON, Texas (AP) — The Dallas Cowboys are giving up points and giving up the ball.

The Cowboys fell behind for good after Dak Prescott and Ezekiel Elliott lost fumbles on consecutive offensive snaps in the second quarter of a 49-38 loss to the Cleveland Browns.

While Prescott became the first NFL quarterback to throw for at least 450 yards in three consecutive games, the 1-3 Cowboys allowed a franchise-record 307 yards rushing.

They also became the first team since the Raiders in 2012 to allow 38 or more points three games in a row in the same season. Coach Mike McCarthy says their minus-7 turnover ratio isn’t a winning formula.