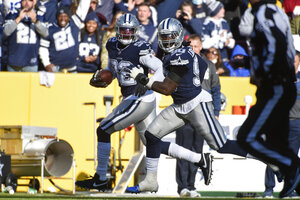 LANDOVER, Md. (AP) — Micah Parsons sacked Taylor Heinicke twice and forced a fumble that was returned for a touchdown, helping the Dallas Cowboys make good on coach Mike McCarthy’s guarantee by holding on to beat Washington 27-20 Sunday and snap their rival’s winning streak at four.

Dallas led 24-0 and 27-8 before Kyle Allen replaced Heinicke and led a 73-yard TD drive and Cole Holcomb intercepted Dak Prescott and ran it back for a pick-6. Washington’s comeback bid came to an end when Allen fumbled with 2:24 remaining.

The Cowboys staked themselves to such a big lead thanks to a big first-half showing by their defense. Dallas forced four turnovers and had five sacks.

Doran Armstrong recovered the fumble Parsons forced and returned it 37 yards for a touchdown, and Randy Gregory picked off Heinicke and forced Allen to fumble on a sack the day after he was activated off injured reserve. Armstrong and his teammates celebrated his TD with some of the many Cowboys fans in attendance for what felt like a home game for the leaders in the NFC East, complete with custom benches on the visiting sideline.

In the aftermath of McCarthy saying, “We’re going to win this game — I’m confident in that,” his team sputtered late but took care of business. Prescott threw for 211 yards with a touchdown pass to Amari Cooper and two interceptions, Ezekiel Elliott ran 12 times for 45 yards through a knee injury and the Cowboys (9-4) distanced themselves from Washington (6-7) in the NFC East.

Tensions boiled over with 10:29 left when Washington rookie William Bradley-King — promoted off the practice squad in the morning because of COVID-19 absences — shoved Prescott near the Cowboys sideline. Elliott shoved Bradley-King, and Dallas right tackle La’el Collins was ejected for his role in the skirmish.

With blue and white jerseys outnumbering burgundy and gold at FedEx Field, the Cowboys made themselves at home by ordering heated benches with the silver star logo and team wordmarks. Owner Jerry Jones made a point this week to say the D.C. area is his team’s biggest concentration of fans outside Texas.

By far the biggest crowd to witness a Washington home game this season saw Heinicke get sacked four times and exit with a left knee injury. Heinicke finished 11 of 25 for 122 yards, a 43-yard TD pass to Cam Sims and a diving 2-point conversion after his miserable first half.

Antonio Gibson fumbled for the sixth time this season, Allen was 4 of 9 for 53 yards and Washington’s streak came to a screeching half after allowing 18 points in the first quarter — more than it was giving up per game over the past month.

Parsons became the first rookie since Jevon Kearse in 1999 and third in NFL history to have a sack in six consecutive games. His 9½ sacks over the past six games are tied for the most by a rookie in that span.

ZEKE GUTS IT OUT

With Tony Pollard inactive because of a foot injury, Elliott got the lion’s share of the carries before the game turned into a blowout. Zeke surpassed 1,000 scrimmage yards for the sixth consecutive season and came back in the fourth when the game got close again.

With Allen replacing Heinicke, Washington has now had at least three quarterbacks take a snap for the fourth consecutive season. The most recent time the organization had one QB all season was Kirk Cousins in 2017.

Cowboys: LT Tyron Smith limped off late in the third quarter with a left ankle injury.

Washington: WR Terry McLaurin was evaluated for a concussion after his head bounced off the turf trying to make a catch early in the third quarter. … LT Charles Leno left late in the second quarter with a back injury. C Tyler Larsen was carted off in the fourth with a left leg injury. … TE Sammis Reyes left with a concussion.